The Otmoor basin forms the floodplain of the River Ray. It is a natural wetland that in the past flooded during the winter and then gradually dried out during the spring and summer to sedge, reed beds and water meadows. The people in the surrounding villages harvested wildfowl and fish and during the summer they grazed and hayed the meadows. More recently the land was drained and fields were given over to arable farming. A large area was owned by the Ministry of Defence and this area remained as wet rough grazing.


The RSPB has acquired almost one thousand acres in the area and have set about returning this to lowland wet grassland, which is the preferred breeding habitat for Lapwing, Snipe, Redshank and Curlew. In addition they have created a fifty five acre reed bed, encouraged scrub in some areas and developed scrapes and wet features throughout the site. There is a car park, a large hide, two viewing screens and several permissive footpaths. It forms a very extensive reserve. The list of species recorded here is well over two hundred and includes some notable rarities including: Glossy Ibis, Lesser Yellowlegs, Purple Heron, Great White Egret, Marsh Warbler, Red Footed Falcon and Spoonbill. In a normal year we would expect to see over one hundred and fifty different species. The seasonal sections below give an indication of what one might expect to see during the year.

From the Headington roundabout on the ring road on the east side of Oxford (SP555074) take the minor turn-off signposted for Barton, just before the turn off that heads towards the M40. Follow this road for about 3km until you come to a cross-roads. Here turn left and then immediately right, signposted for Beckley village. Keep straight along this road and at the church follow the road round to the right.  Just past the Abingdon Arms pub keep straight on when the road bends round to the right. This will be Otmoor Lane which should be followed all the way down to the end where it turns to the left and the car park entrance is immediately on the right (SP569126 ).


Spring and Summer
From late March onwards the focus is on arriving migrants that stay and breed and on passage birds. During this period and throughout the summer it should be possible to both see and hear ten species of warbler, amongst them: Grasshopper Warbler, Garden Warbler and Lesser Whitethroat, as well as the commoner species, and all of them breed on the reserve. Cuckoos parasitise Reed Warbler nests and are frequent here. This is one of the last reliable sites in Oxfordshire for Turtle Doves and there are usually at least two pairs present. At the very beginning of May there is normally a large influx of Hobbies and for a week or so just after they have arrived there can be up to twenty birds feeding over the fields before eventually dispersing to breed. There are usually a couple of pairs that breed here and remain throughout the summer. They can be seen most days hawking dragonflies over the fields and ditches from mid morning onwards. Marsh Harriers visit throughout this period but as yet have not stayed to breed.


From early March Lapwings will be holding territory and displaying and they will be joined by Redshank, Curlew and Snipe. Snipe can be heard drumming right through to July. Little ringed Plovers and Oystercatchers usually attempt to breed on the moor in most years, with occasional success. Garganey is present in good numbers although confirming breeding is difficult with such a secretive duck. Other regular breeding species are large numbers of Skylarks, Reed Buntings, Bullfinches and the commoner hedgerow birds.

On passage there will be Wheatears, Whinchats, Redstarts and the occasional Ring Ousel. In addition we always expect to see a number of different passage waders although these are much more weather dependent. Quail are heard most years but seldom seen. Hirundines and Swifts are always noticeable taking advantages of the hatches of flies from over the water bodies and the insects around the cattle, that are brought on to graze the fields once the Lapwing breeding season is over. 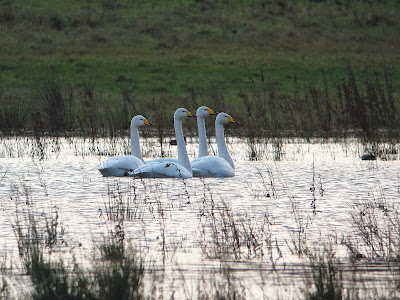 Autumn and Winter
Another passage takes place in early autumn and birds seem to have much more time to feed up and improve their condition before moving on, now that the breeding imperative has gone. As our breeding migrants leave their place is taken by winter visitors, notably Redwings and Fieldfares. It is at this time that we have a major influx of wildfowl most noticeable amongst them very large numbers of Wigeon and Teal. At the height of the winter there will be well over a thousand of each of those species present. There will also be large numbers of Gadwall, Shoveler, Tufted Duck, Pochard and Pintail. Water Rails that are present all through the year become easier to see at this time of the year. Large flocks of Lapwings and Golden Plovers can be seen over the moor during the winter often in flocks of over a thousand. A Starling roost will usually develop in the first winter period and numbers have been as high as fifty thousand birds. They roost in the reed bed and can put on the most spectacular displays. The roost and its display can disappear in a matter of days as the flocks move on. Bitterns have been present during the last six winters and Bearded Tits are becoming a regular autumn attraction. Whitefronted Geese are a regular visitor in the late winter period often in company with the resident Greylags and Canada Geese. Winter swans are also possible but less regular and less reliable.
Merlin, Hen Harriers and Short Eared Owls are regular winter visitors and join Peregrines, Common Buzzards, Kestrels and Red Kites as the raptors to be seen. Ravens, present throughout the year are much more likely to be seen at this time.

A visit at any time of year will be interesting. As well as the birds there are a wide range of different Butterflies and Dragonflies. They are often present in very large numbers when compared to the countryside at large.

There are many mammal species that are regularly seen here most notably Brown Hares and Otters.
I hope that you enjoy your visit at whatever time you choose to come. 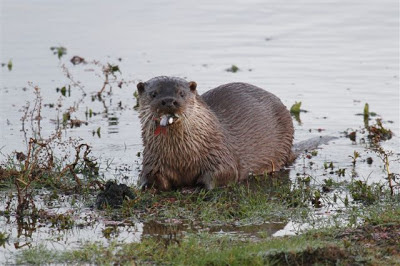