February got off to a fine start with the arrival of 8 Bewick's Swans on Greenaways Otmoor on the 2nd of February though unfortunately they only stayed the one day. The 2 Bewick's that were found off Ham Lane in Aston on the 23rd were slightly more obliging. The trio of Sawbills including at least two redhead Smew and a female Red-breasted Merganser remained at Sonning Eye GP's into February with the number of Smew rising to 10 individuals by the month's end. Waxwings remained in evidence around the county including 29 birds at Kennington on the 10th and a flock of 18 near Sainsbury's Heyford Hill store on the 11th. A flock of over 60 birds in Marston on the 26th probably constituted the largest single count this month. 30+ birds in Risinghurst and another 18 in Witney on the 27th ensured that Oxfordshire's Waxwings remained as the winter receded. Shelducks returned to the county mid-month with a mini influx at several sites, most notably 6 at Port Meadow on the 18th. An injured Avocet was a superb discovery on floods near Longcot on the 20th-21st with the only other wader of note being the one-day Grey Plover at Otmoor on the 14th. The provenance of the 4 Whooper Swans which were 'found' at Buscot Lake on the 25th was called in to question with the suggestion that the birds had in fact been pinioned.At least one Bittern remained on Otmoor throughout February. Another 'Bog Thumper' was also seen on one of the Lower Windrush Valley pits on the 15th of February. The 4 long-staying Scaup remained faithful to Farmoor throughout the month as did the Slavonian Grebe. Port Meadow was the location for all the county gull action this month: early on in the month a couple of Glaucous Gulls (one juvenile and one adult) were found over the course of a couple of days with the adult sticking around and being seen on and off throughout the month. On the 9th a one-day Iceland Gull turned up and to cap it all four different 1w Caspian Gulls were seen on the Meadow floods during the first half of the month.

S.O.D.O.F.F. was conceived in 1991 in a pub in Wallingford by a few birders who wanted a bit more oomph from a meeting about birds and birding. SODOOF stands for “South Oxfordshire Ornithological Fellowship of Friends” sounds like something from “Lord of the Rings” but believe me not all of us are Hobbits or Elves come to that! We decided to hold regular meetings around 3 per year and issue a “journal” for each meeting, the meetings were held in Cholsey at the old pavilion until it got burned down (It wasn’t us) and the last meeting was held in the Old School Day Centre here at Marymead. The core team initially for SODOFF was Ian Lewington, Peter Pool, Carl Salmon, and myself. We also recruited many others with special skills or no skills whatsoever to help out and/or write various articles, these included Roger and Geoff Wyatt, Martin Hallam, George Reszeter and many other well-known Oxfordshire birders.


The “Teletree” was developed alongside; this was a telephone-based system for disseminating information on rare or scarce county birds. Initially around 10 members but this grew over the next few years to 30+ members and started to get rather complex for getting information to all concerned. With the hibernation of SODOFF (we aint gone away yet!) the Teletree became OBIS (great for acronyms aren’t we) and continued on well in to the 2000’s but as communication media progressed this fell in to disuse but it done the job for those years it was active and a lot of county birders saw some good stuff because of it.

The OOS (Oxford Ornithological Society) perceived us as a potential threat and we even had a meeting with the OOS president, Dr Andy Gosler in a pub in Wallingford one evening and were successful in allaying any fears of a fledgling bird club usurping the authority of the oldest bird society in the world.


The first meeting was held on 12th August 1992, the journal was entitled “Not the birds of Oxfordshire” and was mainly about the Teletree, at this point George Reszeter was onboard as a photographic consultant and Geoff Wyatt for catering and Roger Wyatt joined the board with a special responsibility for hall bookings. Andy Swash gave a talk that evening on the birds of Venezuela.


“Roger’s noises” (Roger Wyatt), “Martins ID quiz” (Martin Hallam) and “the mystery bird quiz” (Lew) were born and provided many an entertaining time trying to guess what bird made this or that noise especially after several cans of Caffreys. I’m sure Bill Campbell would have frowned on us and then offered us a wee drop of whisky from his hip flask! Over the next few years we had talks from the esteemed Mr Lev Lewington himself, Jon King, Dave Cotteridge, Tim Loseby, Dave Massey, Andy Swash (again), Mike Amphlett and many other notable “ornithologists” “photographers” and “ecologists”.


The journal took on many guises with names like “SODBB”, “SOD the new year”, “Bastard Wing”,  “Turdus”, “SOD’ING World”, “Scilly Sod” to name but a few and featured many class articles such as “Chumming for Black Grouse”, (remember that Rog!),  “5 go North”, “Society wedding of the year”, and the now infamous “Skinny dipping on Scilly” photographed by George Reszeter and organised by Debbie Lewington, still have to get you back for that Debs, and the very prestigious “Serious back Page” with all the graphics dominated by our prestigious local bird artist Mr Lewington. 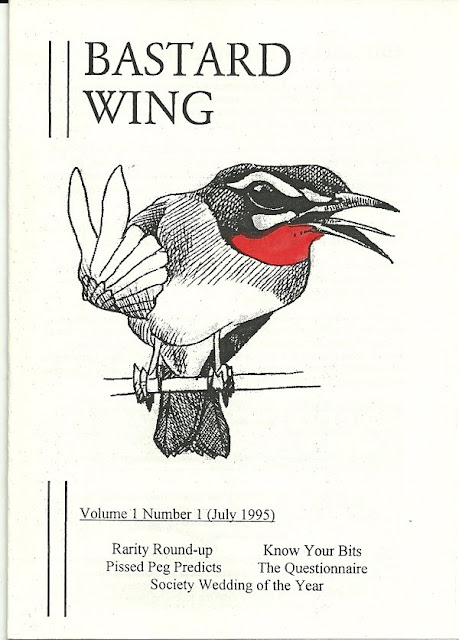 The editorial meetings usually took place in the George and Dragon in Sutton Courtney where many useless ideas were formulated and included in the journals and at the meetings.We even had T-shirts, car stickers etc printed, and even designed a pair of logo’d unisex undergarments. The T-shirts and car stickers were seen throughout the land from Scilly to Wick on various twitches, and the name of SODOFF became known internationally known with several sodoff’ers flouting their T-shirts on international birding trips. 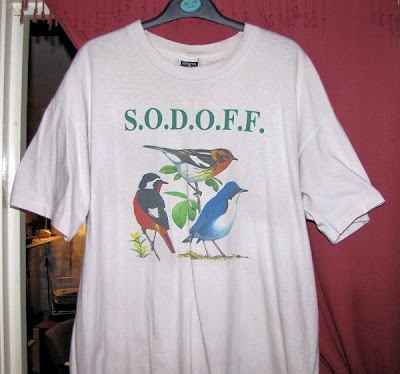 SODOFF eventually went in to hibernation in the late 90’s due to financial considerations waiting for the day it will re-awaken and take the birding world by storm once again.

*I accept no responsibility for the accuracy of the above article as I cannot remember it all (too pissed then and too old now)!