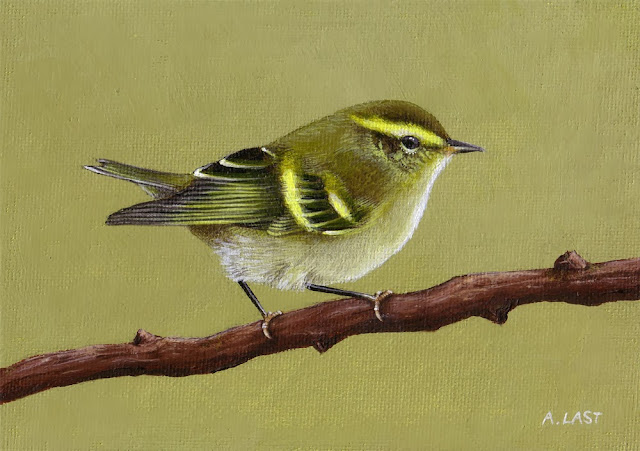 October...be careful what you wish for! After bemoaning how dire September had been for scarcities we only had to wait a few days before the local grapevine went in to meltdown on the 2nd. The top three sites in the county all scored big with some great birds on the same day.

First up, a very obliging Great White Egret arrived on Otmoor on the 2nd and remained, with only the briefest of sorties off to Wilstone Reservoir in Bucks before returning to the Moor and continuing its elegant residency until the month's end.

Almost overlooked on the 2nd, a Spoonbill was briefly in the south of the county at the Henley Road gravel pits. 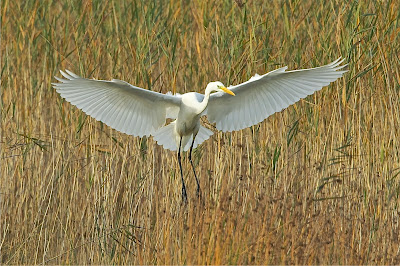 Three Bearded Tits were again seen on Otmoor on the 6th and subsequently though sporadically throughout October. A Bittern was seen flying over the reedbeds at the reserve on the 8th and 11th. Raptors returned to the Moor  as harbingers of the forthcoming winter with the arrival of a ringtail Hen Harrier on the 16th. A male and female Merlin also returned at the start of the month reclaiming the Otmoor pastures from their summer counterparts the Hobby. Other Merlins seen within the county were at the The Devil's punchbowl and Aston on the 7th and Lollingdon Hill on the 16th. A Short-eared Owl was being harassed by corvids over Greenaways Otmoor on the 20th. 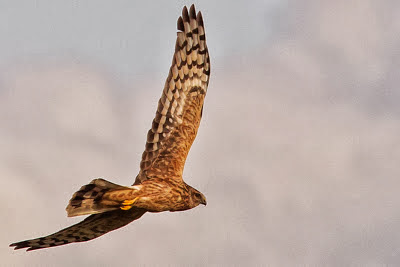 
Another of the big birds to hit the county on the 2nd was the first twitchable Yellow-browed Warbler for nine years, which  was discovered amongst the Willows at the end of Aristotle Lane Port Meadow. This enchanting little Siberian sprite enthralled visitors and county lister's alike until the afternoon of the 4th. and if one Yellow-brow wasn't enough, a second bird was found at the Abingdon Science Park by two visiting Lincolnshire birders working on site. Interestingly in common with the Port Meadow bird, it too was found on the 2nd and remained until the 4th, a possible third Yellow-browed was seen briefly at Radley on the 9th. 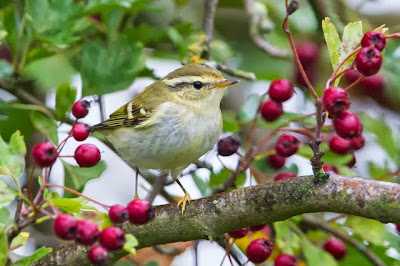 It has been an unprecedented autumn for these warblers nationally with multiple records all along the east coast from Shetland to Kent it was perhaps inevitable that some would filter through the home counties. Previous records in Oxfordshire include.


Not to be out done on the 2nd of the month, Farmoor conjured a handful of pelagic bruisers to close the proceedings for that date and scatter the Gulls in all directions. No less than four Great Skuas menaced the skies over F2 before continuing to power south west. Incredibly a fifth battered Bonxie arrived near dusk at Farmoor on the 29th no doubt a victim of the storms that hit Britain on the 28th it then proceeded to kill and eat an unfortunate Lesser-black backed Gull. Though still present the next morning it soon became apparent it was unable to fly and after some deliberation it was decided that in the best interests of the bird it should be taken in to care. 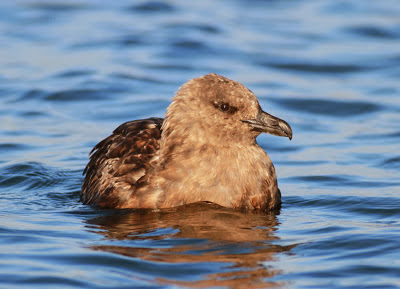 
A Slavonian Grebe found the south east of F2 to its liking on the 22nd where it remained for the rest of the month. It was however to be eclipsed by a fine drake Long-tailed Duck Farmoor on the 28th which also saw out the month. 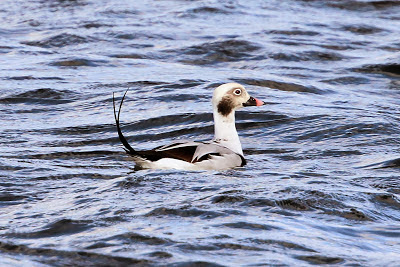 
A typically showy Little Stint was foraging along the causeway at Farmoor on the 4th and was joined by a second juvenile on the 5th. A pair of Spotted Redshank also touched down momentarily along the causeway at Farmoor on the 12th. More graceful were the two first winter Little Gulls which also arrived on the same day. Rock Pipit numbers gradually built during the first half of the month at the res to at least 5 birds. Continuing with the recent oceanic theme, Farmoor hosted a Juvenile Gannet which unfortunately left as quickly as it arrived late on the afternoon of the 14th and constituted the sixth record for the site and the first since 2002. A first winter Caspian Gull  was amongst the roost at Farmoor on the 15th along with three Meds with a further adult Cass amongst the roost on the 16th. 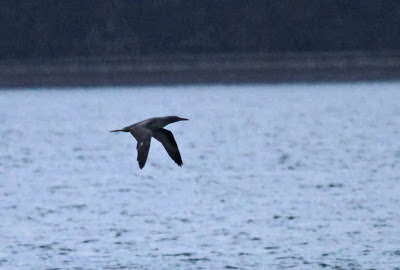 
Away from Farmoor there was an unconfirmed sighting of a probable Crane near Thame on the 12th which may have been the recent bird seen a few days prior on the outskirts of Aylesbury.


A Ring Ouzel was a superb discovery found feeding on Yew berries outside the council offices in Boddicote on 18th with a second bird found in the south of the county at Furzewick on the 19th. These two local sightings tied in with a large national influx in October.


A Cattle Egret of unknown origin was visiting gardens in Chinnor on the 19th. Crossbills were noted moving through Oxon airspace with 27 seen at Buckland Warren on the 24th and 3 birds over Farmoor on the 26th. A Lesser Spotted Woodpecker was at Lark Hill near Wantage on the 24th. An impressive count of 42 Mandarin Ducks were seen on the Thames just north of Pangbourne on the 25th. 
At least 2 Waxwings were seen briefly at Abingdon Science Park on the 30th with another single bird nearby at Abingdon Lock on the 31st. Continuing with the winter theme a smart Great Grey Shrike was a brilliant discovery to the north of the county at Balscote Quarry on the 29th and remained until the month's end although ranging widely. Another butcher bird was a surprise find on the morning of the 31st at Barton Field Nature Reserve on the outskirts of Abingdon though so far it hasn't been seen since it's original sighting.


“Go to the banks of the great grey-green, greasy Limpopo River, all set about with fever trees, and find out.”.. Rudyard Kipling..The Just-So Stories.

Maybe it has changed since Kipling’s day or perhaps he just got it wrong. It isn’t “grey-green” and it isn’t “greasy”, but it is the Limpopo and it is still great. Nor is it “set about with fever trees”, instead large sycamore fig and jackalberry trees shade the area where we have stopped. The place is known as “Crooks Corner”, it overlooks the confluence of two rivers and from this bank we can see two other countries. The Limpopo is wide and shallow here and almost impossible to see, as it slips snakelike between sandbars and pools. The mile wide strip of shingle, sand, and water between the distant bank and ours is scattered with reminders of the floods of the previous year. The bleached carcasses of huge dead trees have snagged all sorts of debris and now wear them like tattered shrouds. Bare twigs have become perfect vantage points, from which bluecheeked and whitefronted bee-eaters hawk for insects. Reed cormorants and a lone darter, its wings spread out to dry like some heraldic device, perch on other more substantial branches.

It is deserted and the absence of any man-made noise amplifies the natural sounds. A cisticola is ticking in a clump of long grass, all kinds of insects buzz and hum and a fish eagle calls repeatedly from further downriver. Disconcerting and much closer by hippos snort, grunt, and splash in the pool just below us. The stillness reinforces our sense of isolation; we have the wilderness to ourselves. We have driven for several hours to get here and have seen no more than three or four other vehicles all morning. Since turning onto the dirt road twelve kilometres back we have seen no one at all.

We joke about starting a new bird list for Mozambique as a party of yellow-billed storks glides down to the water from beyond the far shore. It is getting increasingly hot and the air over the riverbed shimmers. We scan carefully. The heat is forgotten as we spot a small group of Böhms Spinetails fluttering above the water, tiny almost tailless swifts that look and fly more like bats than birds. This species is a speciality of the region and is one of the things that have brought us here.

I am a practiced twenty-first century traveller. I am familiar with borders that are clearly demarcated and delineated. I expect barriers, gates, immigration and customs officers. I have experienced the irritation that can go with changes of bureaucracy and jurisdiction. Here there is no sign of that at all, although I guess the crocodiles basking immobile on the sandbars might make formidable border guards and are not open to bribery. There is nothing formal here, just a river in the bush. Yet despite the lack of conventional evidence I have an overwhelming sense of being at an extremity. This is not only a political border. It transcends the arbitrary drawing of a line on a map in some distant European city in the nineteenth century. This is a natural border as well. Such a division might be broader and not so sharply drawn. It is subtler, it is softer, blurred and sometimes indistinct, but it is nonetheless a real division. The lemonbreasted canaries in the mlala palms that we had watched a few kilometres back up the track; the crested guineafowl foraging in the riparian scrub like clockwork punks; are species that hereabouts reach the south-western edge of their range. Equally some Southern African species can be found no further north or east.

This is a transitional zone biologically, but I realise that there is even more to it than that. I am at a social and psychological crossroads too. Back down the road is a safe, familiar and comfortable version of wild Africa, with rest camps, picnic places and pre-booked accommodation. Over there on the other side it is different. It is somewhere altogether more alien, unsettling, unpredictable and raw. Just for a moment I have a sense of how it might have felt to be in this place at another time - when, by braving the river, you could flee the laws of one country for the sanctuary of another. I also have a powerful sense of how dark, difficult and dangerous such a time must have been. The place has brought my imaginings to life.

So here we are, scanning the trees for wattle-eyed flycatchers, where the Luvuvhu and the Limpopo meet and the road runs out. We are ostensibly in the middle of nowhere but are actually somewhere significant, right out on the edge. 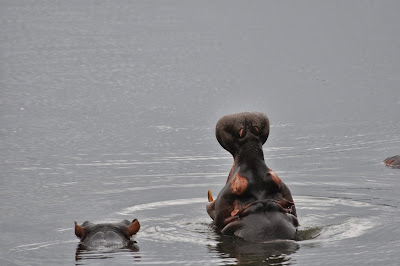