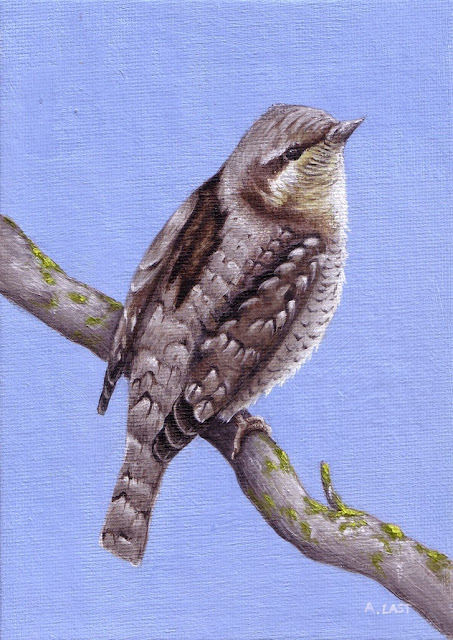 
September, a month traditionally offering up some choice birds to the discerning birder and low down dirty county lister's alike, sadly held few surprises .This month the highs referred more to the weather than the numbers of migrants and scarcities we were seeing, and no doubt the absence of any flood water on Port Meadow and very little on Otmoor has compounded these autumnal county doldrums.

However September has not all been bad...

A second Wryneck for the year was discovered on the aforementioned Otmoor on the 3rd of September but remained typically and frustratingly elusive on the reserve and was unfortunately only seen by a handful of lucky souls before melting away back in to the myriad of Blackthorn.
Judging by how secretive these birds invariably are, it's tempting to speculate that the total number of Wrynecks migrating through our county must be considerably higher than the two recent finds.

Marsh Harriers were still very much in evidence in September with the long staying female being seen sporadically on Otmoor throughout the month, being briefly joined by another bird on the 2nd.
A female/juvenile was at Pit 60 near Standlake between the 8th-14th with what was most likely to have been the same individual seen between Vicarage pit & Dix pit Stanton Harcourt on the 14th.
Another female was seen near Abingdon Marina and 1066 on the 13th and not to be out done a female was seen quartering Shrike Meadow at Farmoor on the 21st. 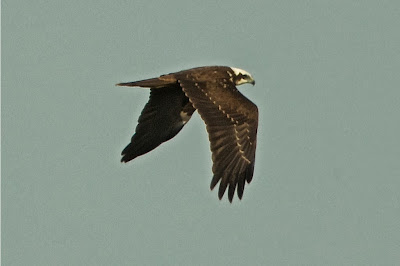 A Honey Buzzard was reported along the Berks/Oxon border on the 10th with the all important,
flight in to Oxon airspace securing a second record for the county this year. 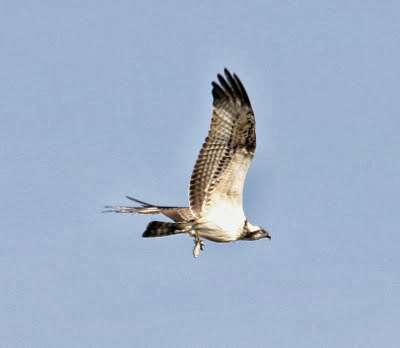 Continuing with the raptor theme a juvenile Osprey was a welcome discovery at Radley Lakes on the 29th stopping off and feeding on route to its wintering grounds on the west coast of Africa. 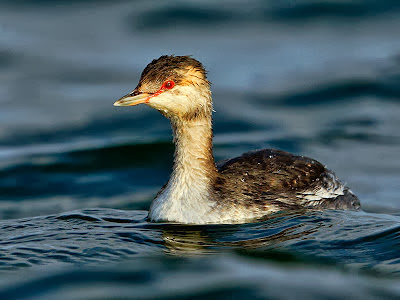 A Black-necked Grebe graced Farmoor on the 2nd with a further two birds bookending the month
with their arrival on the 27th. A superb Slavonian Grebe joined its smaller cousin on the 29th.

Away from the traditional locations within the county Mandarin Ducks were seen on the 9th at Farmoor and at Standlake on the 14th. The 2 unringed Ruddy Shelduck of unknown origin brought a splash of the exotic to the B.O.S Bicester Wetlands Reserve on the 23rd. A female/juvenile Garganey was amongst the Teal at Radley on the 14th. 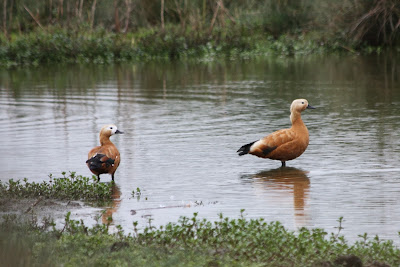 Wader numbers continued to ebb and flow including 2 Little Stints at Farmoor on the 4th with a another single bird there at the tail end of the month. The 5th found 11 Ringed Plover at Farmoor and a supporting cast of two fly-through Curlew Sandpiper on the 5th and 7th respectively, much like their predecessors last month, neither decided to stop. 4 clockwork Sanderling were much more obliging on the 7th. 2 Ruff found Pit 60 to their liking on the 12th and 13th as did a single bird along the causeway at Farmoor on the morning of the 24th. 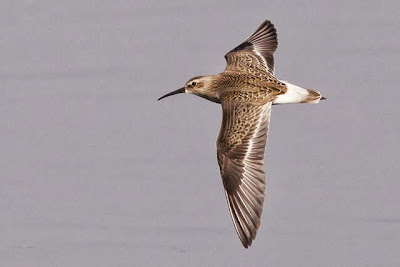 Fly-through Curlew Sandpiper Farmoor courtesey of The Gun-slinger
3 Sandwich Terns briefly touched down at Pit 60 before continuing on to Marlow GP's in Bucks on the 9th. Black Tern numbers peeked at 11 on the 5th at Farmoor with a single bird present on the 29th. Lurking amongst the Larids in the roost at Farmoor on the 25th were two fine Caspian Gulls an adult and a juvenile, hopefully these two and last months two juvs could be forerunners to a good winter for this species in the county...one can at least hope. 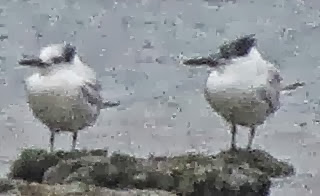 There was speculation that the two juvenile Turtle Doves on Otmoor could constitute a third brood for what has been, on Otmoor at least, a successful year for these engaging little doves.

3 Redstarts refuelled on Otmoor on the 1st with birds still present on the 21st and the 23rd. Singletons were at Cholsey on the 3rd and at Grimsbury Res on the 7th. Whinchats were well represented with many sightings at a number of locations, high counts included up to 20 birds at Otmoor on the 1st. 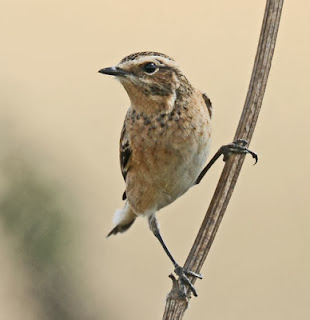 Meadow Pipits started to move through Oxfordshire in increasing numbers mid month and
Rock Pipits were at Grimsbury Reservoir on the 15th and Farmoor Reservoir on the 22nd & 27th
with two birds present on the causeway on the 28th. Rather less predictable was the Tree Pipit found near West Lockinge also on the 28th.

October could still yet redeem this birding autumn for the county, perhaps a Yellow-browed Warbler staccato amongst the branches and tumbling leaves could set pulses racing. however the arrival of the first Bittern and Goosander on Otmoor by months end harbour the seasons true intent...


Back in Time – St Abbs Head 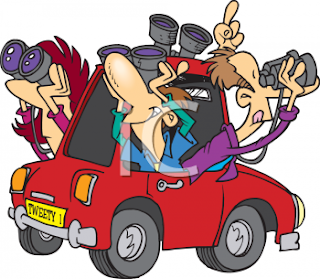 25th May 1993 saw 4 of us; Ian Lewington, Martin Hallam, Graham Etherington and I make for St Abbs Head in the borders for a Marmora’s Warbler.
If I recall it was a bit of a white knuckle ride as Graham was driving and he had a rather sporty looking car and I’m sure he was in contention for an F1 spot, racing along small country lanes to get us there.


Still we made St Abbs shortly after dawn and found the Marmora’s still present, it was a 1st summer male and a beauty of a bird.
St Abbs head is a national nature reserve on the coast of Berwickshire in the Scottish borders and a very scenic spot, also the home to a large seabird colony that nest on the cliffs that are part of the reserve, a place I would certainly visit again.

After taking our fill of the Marmora’s Warbler we decided to head back south and on the way back we decided to drop in on the Farne Islands as we had heard that “Elsie” the Lesser Crested Tern had been seen recently among the Tern colony there.
We got to Seahouses and managed to take the boat over to Inner Farne, the weather was good and the sea relatively calm. On arrival we spoke to one of the wardens present who said that Elsie had not been seen for a few days, none the less we would still make the most of a visit to these beautiful islands and take in the wealth of seabird’s present breeding on and around the islands.


We wound our way around the various footpaths on the island and constantly being attacked by Arctic Terns that were breeding close to the paths, Martin actually ended up with a small cut on his forehead from a Tern that made contact!
Whilst getting our fill of all the Terns and Auks that were around and scanning some of the coastal rocks I noticed a group of around 50 Sandwich Terns so I promptly set up my ‘scope and went through them one by one and to my surprise found one with a big orangey-yellow bill, that was Elsie!


I called the others over and we sat and enjoyed our 2nd tick of the day.
We stayed on the island a little longer to enjoy the many Terns and Auks present around and take in the atmosphere of the Farne islands.


A very satisfying day, in fact May 1993 was a superb month for rarities with a White Stork at Sidlesham, (Red-headed Bunting) Ipswich, Citrine Wagtail Fleet, Oriental Pratincole Gimmingham, the Marmora’s and Elsie, Great Reed Warbler Elmley, Sardinian Warbler Dungeness, and a Pacific Swift to round off the month at Cley, also other trips to Norfolk, Suffolk, Portland and the Oxon birdrace (107 species), almost 200 species seen that month and many miles driven!

Paul Chandler.
Posted by Badger at 09:20