So that was June. Did it live up to it's billing as the most boring birding month of the year? Well to a large degree sadly it did but there were enough nuggets of interest to keep things ticking over. By way of diversification this month, just as many birders turn their attention to insects in the summer months, so we've added some odonata news as well courtesy of Steve Burch.


The star bird of the month is sadly one that got away. On the evening of the 11th at last light a Phalarope species was discovered at Balscote Quarry. Given the time of the year and the smattering of records in surrounding southern counties it was almost certainly a Red-necked Phalarope which is  a real county mega. Sadly however there was no sign of it a few hours later at first light the next day.


At the end of last month I predicted that any decent rare bird action would likely include Storks, Ibises and Cranes and this did indeed come about. The long staying Glossy Ibis retained its residency at the RSPB Otmoor reserve all month, becoming increasingly ragged as it started to moult. In addition there was an unconfirmed and intriguing report of the same species near junction 10 of the M40 on the 26th. Meanwhile a Common Crane was seen on Otmoor on the 5th and in all probability roosted overnight on Ashgrave before flying off south late morning. What was likely to have been the same bird was seen flying over St Hugh's College in Oxford later in the morning. Sadly, that's all there is to report on the rarity front and we're left with a few dribs and drabs for the rest of the month. 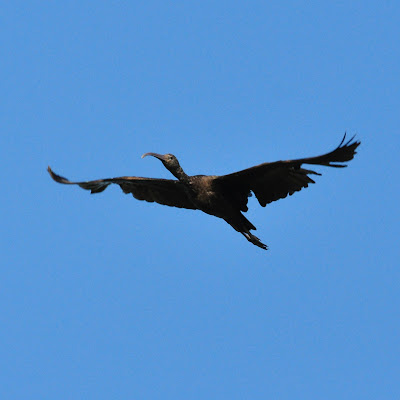 
A Marsh Harrier was seen sporadically on Otmoor over the month and raised much conjecture as to its age and sex. It is in fact a 1st summer male with a retarded moult (thanking you Mr Lewington). 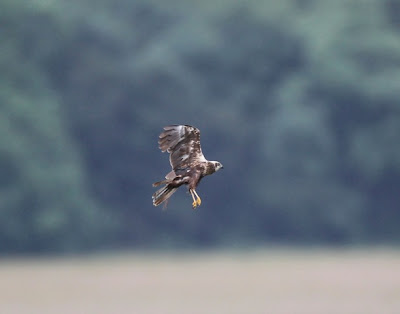 
There is precious little to report on the duck front with a total of five Common Scoter dropping in at Farmoor on the 2nd being the highlight. In addition two unseasonable Wigeon were on Otmoor on the 22nd 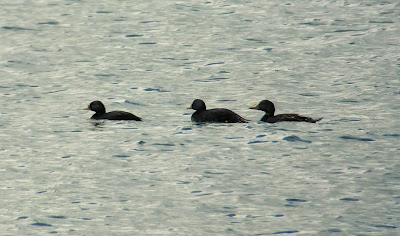 
June is of course a poor month for waders: 3 Greenshank were at Farmoor 15th and a Black-wit was at Farmoor on the 29th. Green Sandpipers heralded the start of autumn with five birds at Cassington and two at Port Meadow on the 25th and a single bird was noted at Otmoor on the 26th. 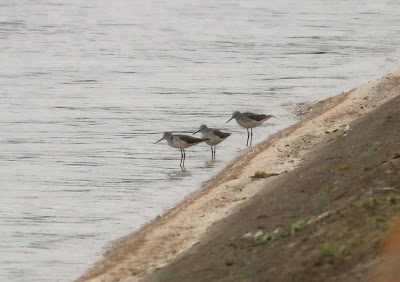 
A Quail was heard near Watchfield on the 8th and at Otmoor on the 15th with two birds heard at Blewbury on the 14th.


There were a shed load of Cuckoos reported throughout the month. They will of course very soon be on their way south again.


A couple of Sandwich Terns arrived at Farmoor on the evening of the 29th and miraculously stayed put all evening making a certain county birder very happy indeed finally to have this species on his county list. 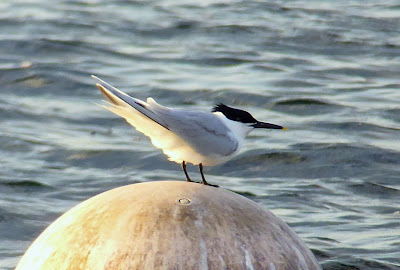 Looking forward, what can we expect in July? Well, sadly, not much more than June really. Past records since 2001 have included White Stork (x2), Common Crane, Pectoral Sandpiper, Marsh Warbler, Bee Eater, White-winged Black Tern and Red-footed Falcon. It certainly would be good if some of those turned up again, otherwise we'll be turning to insects for solace once more.


Oxon Dragonflies –the 2014 season so far
by Steve Burch


Here is an update on this season’s dragonfly records to date for Oxon, as reported to me, and some I have come across by trawling through the various excellent and increasing number of local wildlife blogs. For a full list of records and many excellent photos, why not have a look at the latest news page on my website.

Unlike birds, dragonflies in Oxon are seriously under recorded with only a handful of active recorders who are mostly, like me, taking something of a summer holiday from birding! By including this piece on the OBL, we are hoping to increase further the awareness of these captivating insects, and encourage more extensive reporting which would improve our knowledge of their status and distribution in the county.

This season started with a tantalising and extraordinarily early record of a hawker sized dragonfly near Littleworth in February, which may well have been an exceptionally rare Vagrant Emperor. After that, nothing further was reported until mid April, when David Hastings found a Large Red Damselfly on Otmoor. Activity was then low until early May when sightings picked up and the usual early season Oxon rarities, Hairy Dragonfly and Downy Emerald were found on Otmoor, where the sheltered Roman Road was once again the best area. Wayne Bull then had an unusual sighting of a Downy Emerald in a private garden in Kingston Bagpuise, well away from its known breeding haunts. Hairy Dragonflies also appear to be spreading in the county and further records followed from Whitecross Green Wood, the River Thames near Abingdon, and a possible at a new site near Wolvercote.

Late May and into June is generally the best time for Club-tailed Dragonflies along the River Thames, for which Oxfordshire is notable nationally. This is however an elusive and sparsely distributed species and sightings can be difficult to come by, as I can personally attest (no success in two attempts this year and only one success in several visits going back to at least 2006!). This year there have so far been only two records – one by Martin Wackenier on 5th  June near Abingdon and the other from Jeremy Dexter on 13th June at Wolvercote. If you have any other records, please get in touch – this is surely an under-recorded species and may well occur all along the River Thames in the county. There have been no sightings this year from the traditional site of Goring railway-bridge, as far as I am aware.

With the generally fine and warm weather in June, there are now good numbers of the commoner species to be found all over the county. Perhaps you know of a good local patch with dragonflies that are never reported? If this is the case, please let me know!

Beautiful Demoiselle is another delightful but scarce species in Oxon that appears to be spreading into new areas. Usually associated with fast flowing streams and rivers, it is now being regularly reported from many apparently unsuitable sites such as Otmoor and surrounding areas visited by local recorders (e.g. Whitecross Green Wood). It doubtless occurs elsewhere.

Another good site for scarce species at this time of year is the Dry Sandford Pit/Cothill Fen/Parsonage Moor complex, which regularly has Keeled Skimmers and the nationally scarce Southern Damselfly, both now reported by David Hastings for this season. Small Red Damselflies have also been found here.

If the fine weather continues into July, this should become a very good season for dragonflies, hopefully better even than 2013 which was itself a great improvement on the dismal series of summers prior to that. As the season progress, hawkers, the largest and most impressive family of dragonflies become much easier to see, with some such as Southern Hawkers, regularly visiting gardens. The regal Emperor, patrolling up and down lakes and pond edges is another charismatic one to watch out for.

Local scarcities to seek out later in the season include Small red-eyed Damselfly, which surely occurs at more sites than we are currently aware of. Emerald Damselflies are scarce in the county but can be found on Otmoor and also appear to be spreading with recent records from Shellingford Pit in the south of the county.

Nationally there are good numbers of the rare Red-veined Darters and Lesser Emperors being reported at the moment, including some from nearby Berkshire, so keep your eyes out for these. If you are lucky enough to connect with one or other, please let me know. Some keen local birders also seem to be developing an interest in expanding their county dragonfly lists, so they would also doubtless be interested to hear about any county sightings!

For further information on dragonflies in Oxfordshire, have a look at the county dragonfly section of my website where you will find a county list, a site guide as well as the latest news.


Back in Time
by Paul Chandler

I was working at AEA Harwell at the time and had just gone out of the north gate at around 14:00 to visit a customer in a nearby building when my mobile rang. It was Tom Stevenson who told me there was a flock of 18 Bee-eaters at Fulbrook, a small village just north of Burford. All thoughts of fixing computer problems went straight out of the window!


I rushed back to the office and fortunately my team were well used to me dashing off at short notice. I told them what was on and passed the problem to a colleague and said see you tomorrow. As I run back in the north gate I mentioned what I was about to the police and as I left Harwell they just waved me through and wished me luck.


Roughly an hour’s drive was done in good time; I parked up and quickly found some birders who were watching the Bee-eaters that had settled in the village on the telephone wires that criss-crossed the street. What a sight 18 European Bee-eaters in Oxfordshire. I didn’t actually notice many Oxfordshire birders present but the birds stayed until dark and quite a few locals got there OK.


This was a fantastic county tick and not 1 but 18! I had seen them in Britain before as I found 2 on Portland back in the 80’s, also seen some on Scilly but what a sight they made perched on wires in this quaint little Oxfordshire village.


Thanks to JWB who was first to get the info on the birds and then pass it to the “then” Teletree ensuring the news got around to as many Oxfordshire birders as possible and quickly. This was probably the largest flock of Bee-eaters to ever arrive in Britain and for those who got to see them........................well done! 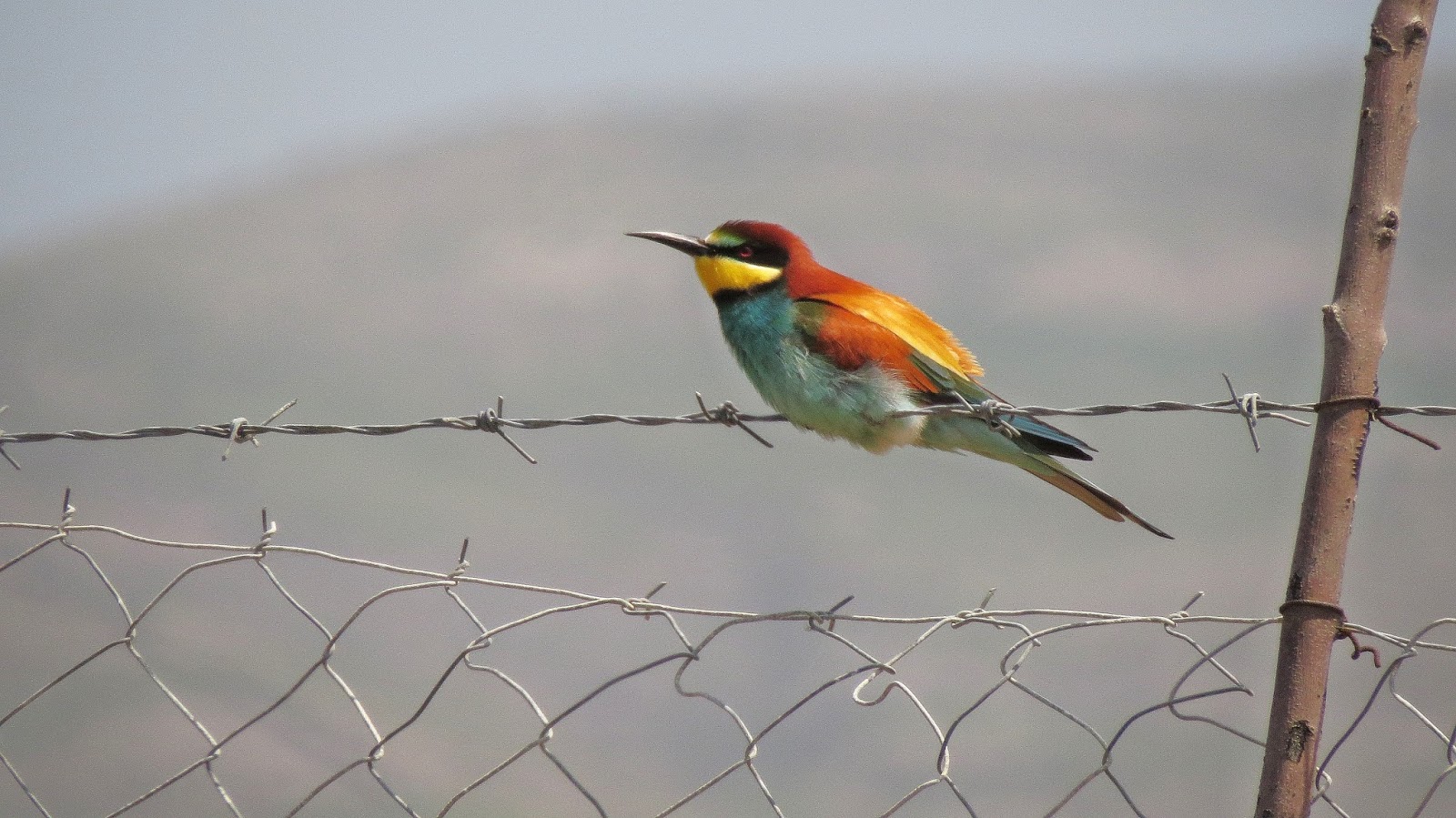 Bee-eater Lesvos (not Fulbrook) by Badger