With the coming of March at last we're allowed to start thinking about spring and warmer days ahead. There is always a great deal of anticipation of the arrival of the first migrants and it's so exciting when they do appear again. Whilst we had this spring miracle to entertain us once again, headline birds were very thin on the ground. There were no white-winged gulls to enthral us and even the usual larger scarce birds (Great White Egret, Stork, Ibis and Crane) were almost entirely absent. I say "almost" as we did have a pair of Common Cranes which were seen briefly over the M40 junction near to Banbury on the 18th but that was about it on the scarce bird front.


So we're left with "good county birds" in the headline bird section. What is presumably our regularly returning Red-necked Grebe arrived on cue back at Farmoor reservoir on the 23rd, looking absolutely resplendent in near full summer plumage on route to its breeding grounds and was still present at the end of the month.

Hot on our superstar Grebe's tail came another, a fine looking Black-necked Grebe at Stanton Harcourt's Dix Pit from the 25th until at least the 29th, although unlike his Red-necked counterpart, views were often distant.

Finally, to round things off with a classic spring bird, a Lesser-spotted Woodpecker was a brilliant find within The Trap Grounds close to Oxford city on the 11th

Difficult call for top trumps raptor this month: should it be the first superb Osprey of the year which characteristically didn't stay long at Farmoor reservoir on the 29th although rather uncharacteristically did perch along the causeway briefly, or the very fine male Hen Harrier which flew through Otmoor on the 30th?


A female Merlin was seen at the Devil's Punchbowl on the 6th was the only record this month. Short-eared Owls remained on Otmoor throughout March often showing at close quarters within Moorleys. Shorties were also seen at Grove airfield on the 5th, along the Ridgeway on the 20th and at Begbroke also on the 20th. The resident Marsh Harriers remained on Otmoor with a single bird seen near Farmoor on the 23rd.

Wildfowl
A fine pair of Garganey showed up on Otmoor on the 18th remaining over the weekend, although
they proved to be elusive at times. What was possibly the same drake was reported from the first screen on the 31st.


A single Common Scoter spent an afternoon in the middle of Farmoors F2 reservoir on the 24th.


The dark-bellied Brent Goose which showed up on Port Meadow on the 24th remained until at least the end of March associating with the regular feral Greylags and affording great views of this delightful little goose.


Talking of geese, two Egyptian Geese flew over Grimsbury reservoir on the 20th and over Waterstock Mill on the 21st - these sightings constituted a first for both locations. The wintering Bittern remained at the RSPB reserve through March but with sightings becoming more infrequent. Finally, the two Great Northern Divers continued their stay at Farmoor throughout the entire month

The first of the 'Sea Swallows' (Common Tern) to arrive was recorded at Farmoor on the 28th and stayed into April. A second winter Caspian Gull was at Farmoor reservoir on the 13th. Two Adult Kittiwakes were amongst the Farmoor roost on the 8th with an amazing four adults present the following evening on the 9th.

Star attraction wader-wise this month has to go to the two Avocet that arrived on Port Meadow on the 23rd although unfortunately it was to be a brief stop-over for these elegant birds as they were not seen the following day.


Four Ruff were on Port Meadow on the 2nd with five present on the 23rd - a good count in what has been a lean year for them in the county. A single Ruff was on Otmoor on the 19th with three birds present on the 20th with a further bird at Standlake on the 20th.

Six Dunlin were on Port Meadow on the 2nd rising to eight the next day and by the 20th the tally had reached twenty four! Upwards of seventeen Dunlin were recorded over the Otmoor reserve in March.

Two Jack Snipe were seen at what is now a regular wintering site Bicester Wetlands reserve on the 3rd with singles also reported on Otmoor at Waterstock Mill on the 13th and on Iffley Meadow on the 22nd.


Redshank numbers on Otmoor rose sharply over March with at least thirty three birds present on the 31st so fingers crossed for another bumper breeding year on the RSPB reserve. The eight Curlew at Otmoor on the 4th remained the highest count not only on the reserve but within Oxfordshire. Two Black-tailed Godwits arrived on Port Meadow on the 7th and remained until the 18th with an impressive seven birds on the floods on the 20th.

What could well have been the first Willow Warbler was seen at Dix Pit on the 30th with several others recorded at Farmoor by month's end.


White Wagtails seemed in low numbers with the only records from Farmoor on the 11th and 21st. A Redpoll showing characteristics of Mealy drew interest at Stanton Harcourts Dix Pit from the 20th. The first summer migrant arrived at Farmoor on the 17th with a fine Sand Martin. Numbers of these hardy little hirundines then gradually increased with over one hundred and fifty present over Dix Pit on the 26th.

Wheatears started to arrive from the 24th with a single bird at Gramps Hill near Letcombe Bassett on that date.


The first Rock Pipit turned up right on cue at Farmoor reservoir on the 3rd with the number rising at the Oxford reservoir to four by the 19th. Not to be outdone, Grimsbury reservoir also scored a Rock Pipit of its own on the 23rd.

Brambling were still being seen sporadically on Otmoor with singles also seen near Moulsford on the 13th, at Wolvercote from the 23rd and an impressive seven bird were recorded near Wroxton on the 26th. The Tree Sparrow which showed up on the feeders on Otmoor was a welcome discovery on the last day of the month and will no doubt raise hopes that in time Otmoor may once again have these charismatic little Sparrows back as a breeding bird.

The Art of Birding

In what we hope will become a regular monthly article 'The Art of Birding' will feature sketches
and artwork from local artist Paul Tomlinson. 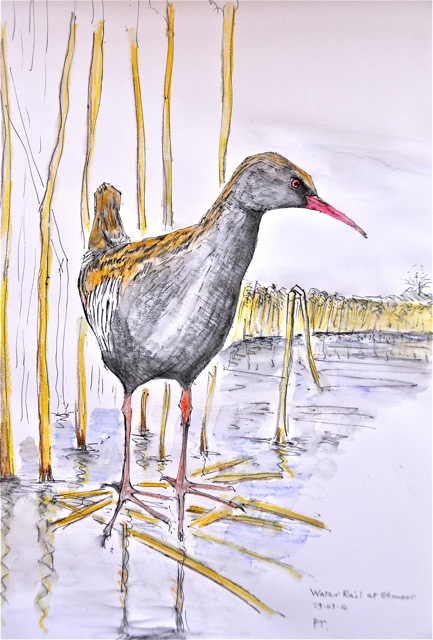 
These secretive Rails are more often heard than seen.
Their piglet like squeal (called sharming) can often be
heard emanating from the reedbeds and sedge on the
reserve. 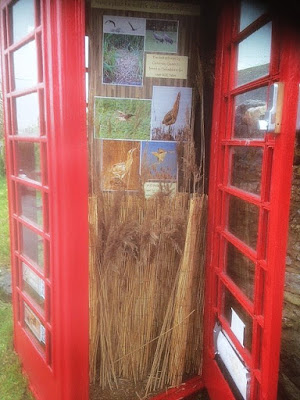 Pete Barker, Otmoor stalwart, blogger and artist has risen to the challenge of creating a vibrant and informative display on the wildlife of Otmoor within the confines of the disused phone box in Beckley village.

Sounds odd but it's an inventive use for the box and is a regular showcase for arts and crafts in the village.

If you are passing it's well worth a look.

The RSPB’s Upper Thames Wading bird project continues this year with another 58 sites to survey. Over 100 volunteers pack their rucksacks and get up early to find and record wading birds alongside the Thames, Ock, Cherwell, Windrush, Ray and Thame rivers.

Going for a pleasant wander in the tranquil early mornings alongside a river and recording the wildlife you see and knowing that you are helping to conserve it, keeps our volunteers returning to survey year after year.  Do you want to catch a glimpse of a Lapwing’s tumbling flight, hear the Curlews soulful heart rendering “cour-leeee” or perhaps spot the nervous Redshank treading lightly through the vegetation?

If you would like to survey your own patch of farmland, then please get in touch. There’s a full training pack and staff on hand to support you through the survey season.