April is one of the most exciting months for birding as all the migrants start to return. It's great to welcome back our summer breeding friends once more and also to see what stops off in our county en route to more northerly locations. Apart from this excitement there is also always the chance of something rarer and this time last year we had the four Ring-necked Ducks at Stanton Harcourt as well as a few Crane and Stork sightings to get our pulses racing. This time however, there's sadly been nothing of nationally rare note to liven up the month and we're left with some good county birds for the headlines.


The most noteworthy occurrence has been the finding of three separate Wood Warblers in the county. This is always a scarce county bird, often found (usually as a singing male) by one person only for it to have moved on before anyone else can get to see it. This was indeed the case with the first two birds when one was found at Spiceball Park in Banbury on the 17th and then a second bird was found just over the road at Grimsbury Reservoir on the 23rd and in both cases, despite the word going out quickly, no one else was able to twitch them. However, on the 23rd yet another singing male was found in the evening at Lower Whitely Farm by Farmoor and as it was late in the day it decided to stay put, enabling several people to twitch it and get it on their county lists.

What would actually have been a nationally rare bird was a possible Hoopoe that was reported near Witney on the 6th but sadly it was never firmed up nor seen again. Also very much in this camp was a possible Cattle Egret reported near Faringdon in field by the road on the 25th.


We had all three rare Grebes in the county this month: our now-regular Red-necked Grebe stayed put until the 13th on Farmoor where it was joined by a Slavonian Grebe on the 9th and 10th. In addition Black-necked Grebes were seen at Otmoor on the 8th and the Borrow Pool in the Upper Cherwell Valley on the 4th. Our Great Northern Divers also lingered at Farmoor until the 13th


Finally, we had a belated report of three Dotterel which were seen for one day only on private land at an undisclosed location. This is another really scarce county bird though the recent one at Balscote a few years back means that most county listers have it already. Sadly, these ones were in an untwitchable location and so news of their presence was supressed.

This time of years is not one that's traditionally associated very much with raptors. Ospreys started coming through from the start of the month with sightings at Farmoor on the 2nd and 3rd, Blenheim on the 3rd, Grimsbury Reservoir on the 18th and Stanton Harcourt on the 20th. A few Peregrines were still reported throughout the month and Hobbies started to arrive back again. Short-eared Owls were seen on the 10th at Cholsey, 16th, 17th and 21st at Otmoor and on the 19th at Begbroke. The Marsh Harriers are still around at Otmoor and a Merlin was seen (chasing a Hobby) on the 21st at Otmoor.

It was quite a good month for Sandwich Terns with lots being reported throughout the Midlands area at the start of the month. They were seen at Farmoor on the 2nd, 4th and 12th and one was even at Port Meadow on the 4th - only the second record ever for this site.

Arctic Terns came through in a narrow window of a few days from the 19th through to the 25th with numbers peaking in excess of 30 at Farmoor on the 24th.

Little Gulls were more spread out with the peak count of 19 birds at Farmoor on the 11th, and singles at the same location on the 3rd, 16th and 24th. Grimsbury Reservoir hosted a couple on the 10th and Port Meadow had one on the 13th.


There were just a couple of Kittiwake sightings with one at Farmoor on the 6th and one (or possibly two birds) at Grimsbury Reservoir on the 18th. Finally there was a rather late 2nd winter Yellow-legged Gull at Port Meadow on the 18th.

April is an exciting month for waders in the county and we had lots of the usual species passing through, far too many to mention in detail. The following is therefore a summary of the rarer sightings for the county. Two Avocet were at Otmoor on the 9th. Singleton Whimbrel were seen at Farmoor on the 19th and the 28th. Single Bar-tailed Godwits were seen at Otmoor on the 21st, at Pit 60 on the 24th and at Port Meadow on the 25th and the latter site also hosted a Grey Plover on the 22nd. Just one Ruff was seen this month at Otmoor on the 28th. A Knot was seen at Port Meadow on the 29th and a Curlew Sandpiper (in wonderful summer plumage) was found at Balscote Quarry on the 28th which stayed until the end of the month.

Apart from our rare county Grebes and Divers which we've already dealt with, we are left with not a great deal in this category. Two Mandarin Ducks were seen at Stonesfield Common on the 5th and the usual feral Snow Goose flock overflew Farmoor on the 10th. There were a few Garganey sightings with two at Otmoor on the 8th, one at the Upper Cherwell Valley on the 26th and a fine pair on Port Meadow from the 16th onwards which stayed until almost the end of the month.

All the usual passerines came back to their usual locations though we're still waiting on the Turtle Doves at Otmoor at present. Cuckoos were back in the usual sites though one can't help but wonder for how much longer we'll get to hear their iconic song.


Redstarts also had a very good month with too many sightings (13 records) to mention individually. Farmoor, Grimsbury Reservoir and Otmoor all played host along with some less traditional sites. A splendid Channel Wagtail was at Farmoor in amongst the Yellows from the 8th to the 13th though at times it proved to be rather elusive.


A litoralis Rock Pipit was at Farmoor on the 1st and a Tree Pipit flew over Lark Hill on the 18th. There were surprisingly few Whinchat sightings with one at Farmoor on the 26th and one at Wardington on the 28th. A singing male Firecrest was at Wantage on the 16th. Finally, with a nod to the passing out of the previous season, single Brambling sightings were recorded at Chimney Meadows on the 9th and at Wolvercote on the 13th.

So what can we look forward to in May, traditionally the best month for rarer birds in the first half of the year? Well, there are plenty of historic goodies to salivate over so without further ado here's the list in no particular order: Black Kite, Bee Eater x 2, Spotted Sandpiper, Red-rumped Swallow, Rufous Turtle Dove, Red-necked Phalarope, Glossy Ibis x 2, Ring-necked Duck x 2, Great White Egret x 2, Roseate Tern, White Stork x 5, Spotted Crake, Common Crane x 5, Spoonbill x 4, Dotterel, Rough-legged Buzzard, Temminck's Stint x 4, Pectoral Sandpiper, Bonaparte's Gull, Scop's Owl and Red-backed Shrike. In addition there were possible sightings of Collard Pratincole and Purple Heron. Let's hope that this coming month turns out to be a good one for the county. 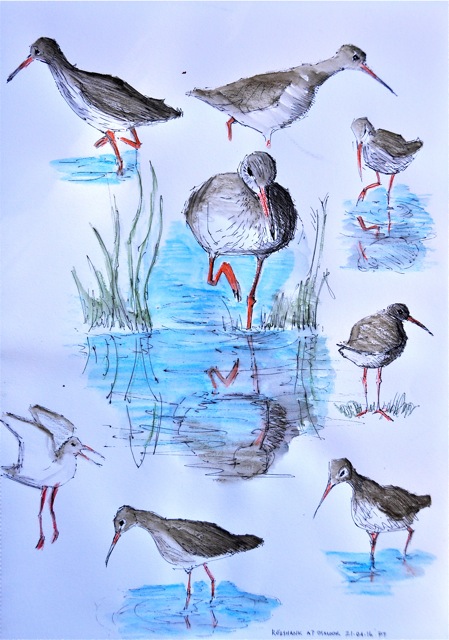 This month's review is a bit on the lean front as it's just been me (Gnome) at the helm. Once Jason is back next month, things should get back to normal.
Posted by Adam Hartley (Gnome) at 21:07