So that was May, statistically the best month for rare birds in the first half of the year, but did it live up to its reputation? Well, yes and no. Whilst the list of birds that were seen is not bad, there was no thigh-rubbingly great bird, at least not one that was generally twitchable. For sure there were some good county birds about but the general feeling at the end of the month is one of disappointment.


The star bird of the month was very much in the untwitchable camp when a cracking Golden Oriole was found on a guided dawn chorus walk in Wittenham Woods on the 8th. Seen as well as heard, sadly only the finder and his lucky band of followers saw it despite extensive searching by all the hardcore county birders who came out on the Code Red scramble.


Talking of untwitchables, a fly-over Spoonbill at Port Meadow on the 22nd is very much in the same camp, being seen by just one observer. This species is almost annual at this site though the views are often frustrating brief as the area is rather prone to disturbance. Also, very much in the untwitchable pile was the report on RBA of a Wryneck at Otmoor on the 29th - nothing more is know about the report and it wasn't seen again. To add to the unattainable list there was a Pied Flycatcher in the garden of the Morning Star pub in Cholsey on the 8th, again seen by one observer. A Dotterel at Barford St. John on the morning of the 22nd was at least seen by a few of the local Banbury birders though sadly the information only filtered through to the wider community once the bird had flown. Finally, in this list though not quite in the same league was a calling Quail at Milton Business Park on the 27th.

In fact, just about the only twitchable highlight bird this month was yet another Wood Warbler at Cholsey south of Ferry Lane on the 3rd. Coming on the back of three birds towards the end of April this was very much "just like buses" but this bird was very obliging and stayed around for the rest of the day, slowly working its way along the river there.


Finally, mention should be made of the epic fall on the 10th in the county. This was passage birding at its best with perfect gloomy and rainy weather conditions bringing down huge counts of waders and Terns. Port Meadow had a couple of Knot, a dozen Greenshank, half a dozen Sanderling, a Bar-tailed Godwit and thirty or more smaller waders. Similarly, great counts of Black and Arctic Terns were had elsewhere in the county. Sadly there was not rarity in amongst them but its days like that which keep patch birders going.

A Honey Buzzard was seen at Frilford on the 28th. Ospreys were seen over Otmoor on the 5th and along the Thames at Sandford on the 15th. A late bird went through Farmoor on the 30th with possibly the same individual also seen on the 30th at Standlake. Hobbies were seen at the regular sites throughout Oxon including four birds at Radley on the 12th and at least fifteen over Otmoor on the afternoon of the 15th. Away from Otmoor a Marsh Harrier was seen at Standlakes Pit 60 reserve on the 17th. Short-eared Owls were still being seen in the county including birds at the Devil's Punchbowl on the 2nd, South Hinksey on the 12th with the Otmoor birds still being seen sporadically until at least the 7th.

It was a good month for Little Terns at Farmoor with a pair seen on the 10th, another bird on the 12th and a fourth on the 18th.

Arctic Terns graced our county as part of their epic migration with birds recorded from the Henley Road GP's in the south (with one bird on the 2nd, four birds on the 10th and two birds on the 14th) through to the other end of the county with a bird at Grimsbury Reservoir on the 13th. Farmoor had four birds on the 12th, but it was the morning of the 10th that saw the highest counts this year in Oxfordshire with at least twenty five at the Baulking Pit (with a bonus adult Little Gull). Away from the usual county sites, Blenheim Park had an Arctic Tern on the 11th.


It was a good month for Black Terns in Oxon with singles seen at Sonning Eye GPs on the 5th, Farmoor on the 6th, six birds at Farmoor on the 8th and an impressive eighteen on the 14th. The 10th saw twelve birds at Sonning Eye and both the Blenheim Park estate and Pit 60 also played host to one of these dusky marsh Terns on the 11th. A late Black Tern was also seen on the last day of the month at Farmoor Reservoir.

It was undoubtably a good month for waders in the county. The first of five Knot records this month occurred at Farmoor on the morning of the 10th with a further two at Port Meadow in the evening and two Knot spent the day along the causeway at Farmoor on the 13th. Wood Sandpipers were seen on the Otmoor RSPB reserve on the 3rd with a second bird from the 11th-14th. Port Meadow also played host to this species on the 6th-7th


It was a great month for Turnstones and as usual the lion's share came from Farmoor Reservoir with three birds present on the 3rd, four on the 21st and an impressive eight there on the 10th. Banbury's Grimsbury reservoir also scored a Turnstone on the 10th.

A distant and elusive Little Stint caused some head scratching when it was discovered on Otmoor on the 11th, although unfortunately it was to be an all too brief a visit to the RSPB reserve.


Dunlin arrived in force at Farmoor with thirteen along the causeway on the 2nd and over fifteen on the 10th. Twenty two were feeding amongst the floods on Port Meadow on the 11th and up to eight were seen at Grimsbury Res on the 11th.


Whimbrel records involved a typically short stay with individuals seen at Farmoor on the 2nd and 10th, Port Meadow on the 11th and on Otmoor on the 8th and 12th. Two birds also flew over Pit 60 on the 11th but an incredible forty two birds migrating over Garsington, also on the 11th, is without a doubt the one of the highest single counts in the county. Five birds were also noted at Cholsey on the same day and unfortunately a dead bird was found at Farmoor reservoir on the 19th.


Greenshank numbers increased throughout May with singles on Port Meadow on the 2nd and 6th, Balscote Quarry on the 6th and at Rushey Common on the 24th. An impressive eight birds were present on Port Meadow on the 9th and incredibly this number was to double to sixteen a day later. Three Greenshank were also seen at Balscote Quarry on the 10th with four present on the 11th. Otmoor also saw three birds on Big Otmoor on the 11th with the number rising to seven birds on the 12th.

Nine Ruff, including some near summer plumaged birds, stopped off at Otmoor on the 4th with a single on Port Meadow on the 14th and at Farmoor on the 18th

A Bittern was again being seen over the reed beds on Otmoor in May. A Red-breasted Merganser was seen briefly at Farmoor on the 12th but didn't linger unlike the male Goosander at Pit 60 on the 17th which stayed until at least the 31st. Shelduck were again seen on Otmoor over May with perhaps ten being the highest count from Port Meadow on the 20th.

A drake Garganey was seen from the first screen on Otmoor on the 24th and a female Mandarin was recorded at Ardington on the 31st.

The welcome arrival of the Turtle Doves back to Otmoor from the 5th was met with a collective sigh of relief that these beautiful doves have once again made it back safely to us. Four calling Turtle Doves have been recorded within the Ministry of Defence land near Arncott which is great news as was the report of two birds present in Cumnor on the 12th.


Cuckoos were seen and heard at Farmoor from the 3rd with numbers on Otmoor peaking at four individuals by month's end. A pair of Cuckoos were also recorded at Sandford-on-Thames at the start of May and at Stanton St John with singles at Cholsey and Pit 60.


Last month's Channel Wagtail was still at Farmoor Reservoir at the start of May before moving due west and relocating near Rushy Common. A second Channel Wag was seen in the Upper Cherwell Valley site near Grimsbury Reservoir on the 11th-13th. Grasshopper Warblers were seen at Farmoor on the 2nd with reeling birds at the Upper Cherwell Valley on the 13th and up to four birds calling within the Otmoor reserve.


Redstarts were still passing through Oxon in May with a single seen at Farmoor on the 3rd. A late Whinchat was in the Upper Cherwell Valley on the 8th.


Nightingales were recorded at what is possibly their last stronghold in the county, within the Ministry of Defence compound at Arncott. Other individuals were also heard singing from sites close to Oxford City including a report of a singing male at Thornhill Park and Ride. Unfortunately hearing one of these birds singing within Oxfordshire is an increasingly rare occurrence and follows a national trend and heartbreaking decline of this ethereal and enigmatic songster.


Spotted Flycatchers were seen at Farmoor, Minster Lovell, Wallingford, Thorney Leys in Witney, Kingston Bagpuize and at Kingston Lisle. A late Ring Ouzel was reported near Great Rollright on the 22nd with another probable seen at Garsington on the 27th. A late Fieldfare was seen at Cholsey up until the 20th.

'Inglorious: Conflict in the Uplands' by Mark Avery

"Driven grouse shooting is unsustainable and ecologically damaging: we should ban it. Intensive management to produce high densities of grouse results in loss of wildlife, increased flood risk, increased greenhouse gas emissions and a whole list of other issues - and it's simply for a sport, a hobby, a pastime. If the Victorians hadn't invented this peculiar British activity we'd never invent it now." So says Dr Mark Avery, a writer, blogger and environmental campaigner. He worked for the RSPB for 25 years before standing down in 2011 to go freelance. For 13 of these years he was the RSPB’s Conservation Director. He is now at the forefront of the campaign to stop the illegal persecution of raptors in the UK. Booking required
Booking registration

Congrats to John Reynolds for turning this little beauty up at Titchwell in North Norfolk on the 29th A nice Red-breasted Flycatcher (if you could do the same in Oxon it would be greatly appreciated).


The Art Of Birds 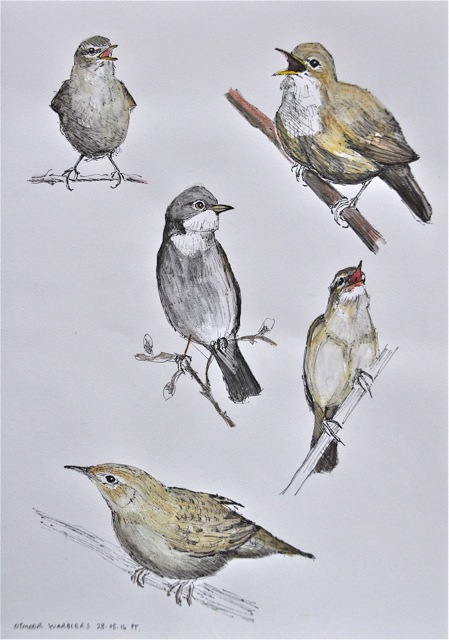