Better late than never, here's the review for November. Whilst traditionally we're well past the autumn passage this month can often throw up something of interest and there have indeed been a few noteworthy birds to liven up the increasingly short days and we race on towards Christmas.


The most intriguing bird was one that unfortunately was never actually confirmed. A report came on RBA of a Rose-coloured Starling at Stanton St John on the 30th. County birders will no doubt remember that the first for the county turned up at the same location back in November 2009 though that was in amongst the houses whereas this one was seen in the fields some distance away. Despite a posse being sent out that afternoon there was no sign of it and unless it's re-found we'll never know if it was a genuine bird or just someone being a bit "trigger happy" over a juvenile Common Starling.


There was no doubt about the next headline bird though: a Great Grey Shrike at Baulking Pit on the 26th and 27th. This species is pretty much annual in the county and whilst it is a good national bird, it's actually commoner in the county than some of the species in "good county birds" section below. Still, it was great to have this charismatic species grace God's Own County once again.


Another national scarcity which is becoming increasingly regular in the county is Great White Egret. Indeed Oxon may be playing host to several as it's rather difficult to know how many birds are involved in this month's sightings. Certainly there was one reported at Standlake Common regularly throughout the month and one was seen at Rushy Common on the 16th. In addition one flew south east over Dry Sandford on the 27th and on the same date one flew over the A40 at Cassington. Is it only a matter of time before they start breeding in Oxfordshire?


On to the good county birds section now and there are several to report this month. A Snow Bunting was seen briefly at Segsbury Camp near Churn on the 27th. This species is less than annual in the county and would have been much appreciated had it lingered.


Next and always a winter favourite, a Waxwing flew over Watlington Hill on the 6th. This year started off looking very promising for this much-loved winter visitor with waves of them arriving in the North and East during the autumn. However, this invasion seemed to stop rather suddenly so whilst there are now reasonable numbers in the northern half of the country it's not yet a classic Waxwing year and it remains to be seen whether any filter down to us by the end of the winter.


Finally, there was a Pink-footed Goose on Otmoor from the 6th to the 8th. This is a rather rare goose in Oxon so this one had plenty of visitors.

The regular wintering pair of Peregrines were again at Otmoor throughout the month with individuals also noted at Radley, Rushy Common at Barford St Michael airfield, Port Meadow and Harwell. Merlin were seen at many of their regular wintering sites within the county including Otmoor, Kingston Bagpuize, Segsbury Camp, Shipton-under-Wychwood, Lollingdon Hill and one was also sighted at Chilton on the 11th.


At least one Short-eared Owl was present on Otmoor at the start of November, often affording great views as it roosted in Moorleys.

Eight Bewick's Swan flew over Farmoor reservoir on the morning of the 26th although unfortunately they didn't stop. Five Whooper Swans arrived mid afternoon at Farmoor on the 2nd and remained until dusk whilst a lone Whooper Swan spent a morning at the RSPB Otmoor reserve on the 2nd. There is some conjecture that this might be the same individual that was at Ardley last month and then at Cottisford on the 24th-25th. Six Whooper Swans flew high north east over Otmoor on the 26th whilst three winter Swans (Whooper or Bewick's) were seen flying over Otmoor on the 19th.

The family party of four White-fronted Geese remained on the Otmoor reserve throughout and seem set to remain over the course of the winter whilst either the same or a different flock of four were seen at Port Meadow late in the afternoon on the 22nd. A pair of Shelduck were seen over Banbury at Grimsbury reservoir on the 11th with a single Shelduck present at the Bicester Wetlands Reserve on the 14th. A redhead Smew was seen on the Sonning Eye gravel pits on the 15th.

A female Goosander was seen at the Wolvercote Lakes on the 6th with another redhead Goosander settling briefly in front of the second screen at Otmoor on the 7th. A drake Goosander was seen Grimsbury reservoir on the 11th, a male was also seen amongst the Dorchester gravel pit complex on the 15th with two birds at Farmoor reservoir on the 28th. Other sightings of this attractive sawbill were of four males along the river Cherwell in the Oxford University Park on the 28th, three at Port Meadow on the 25th and of seven birds at Standlakes Pit 60 on the 29th.

Two Mandarin Duck were at Sonning Eye gravel pits on the 15th. At least three Bitterns were being seen on Otmoor this month with birds at the second screen being uncharacteristically showy at times.

The Wood Sandpiper remained at Chinnor cement works until at least the 2nd with wintering Green Sandpipers recorded at Chinnor, Ewelme Cress Beds, Rushy Common, Otmoor and at the Bicester Wetlands reserve. A Ruff on Otmoor on the morning of the 12th was the only record in the county for November. A single Dunlin was at Port Meadow on the 22nd with sixteen at the same site on the 27th; two Dunlin were also present on Otmoor on the 27th.


Golden Plover flocks remained fairly low throughout November with the only noteable counts occurring on the 9th at Balscote Quarry of up to four hundred and fifty. Woodcock were recorded at Otmoor on several occasions mostly from Moorleys but birds were also seen at the Bicester Wetlands Reserve on the 11th (a site first), at Betterton on the 13th and Warkworth on the 28th and 30th.

An adult Caspian Gull was amongst the Port Meadow roost on the 24th with a first winter present at the same site on the 27th. A Mediterranean Gull was a fine discovery amongst the large gull roost at the Baulking Pit on the 12th. A Kittiwake was seen at Farmoor reservoir on the 17th


A late Swallow was at Farmoor reservoir on the 16th and at Kingston Bagpuize on the 18th.

It seems to be a poor year for Brambling in Oxfordshire this winter with the only reports coming from the Devil's Punchbowl on the 13th with three birds at West Ginge on the 19th. Ring-necked Parakeets were seen in Abingdon on the 15th and amongst the Starling roost on Otmoor on the 25th.

Starling numbers continued to rise on Otmoor to an approximate seventy thousand birds. Murmurations were also noted between Sutton Courtenay and Appleford.


The Art of Birds


For November Paul Tomlinson has sketched a male Stonechat seen on the Otmoor reserve. These enigmatic little chats are always a delight to encounter anywhere. 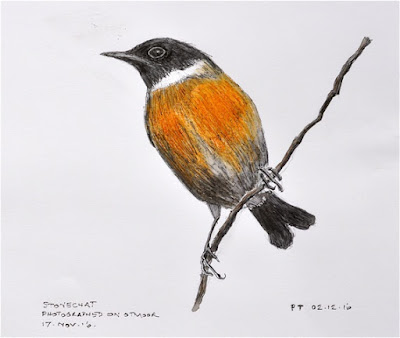 We've been asked by the OOS to remind you that news that is posted directly onto the blog doesn't automatically go into the OOS database and so will be lost to posterity unless you also submit it to the OOS. By far the easiest way of posting to the blog and also entering it on the database at the same time is to submit your sightings via the Going Birding web-site.