Passage through the county in August produced much of general interest with waders and Terns featuring prominently, and a strong presence of migrant passerines in the month's second half. There were no out and out headliners though, so that being the case this review is presented in approximate date order.

The first weekend of August saw a mass national influx of Wood Sandpiper for the second time in a fortnight. Oxfordshire had missed out on the earlier occasion but with these usually scarce items turning up in the early morning of 3rd in neighbouring counties we had to score one. In the event two were found, the first at Rushey Common being rather distant. Another was reported from a private site in the Appleford working gravel pit complex. Subsequently the more familiar Green and Common Sandpiper continued to be reported from different locations county-wide.

On the second weekend unseasonably blustery conditions sent Oxon birders out searching for maybe a displaced seabird or stranded scarcer waders. But in the event little transpired, the highlights being a juvenile Black Tern at Farmoor Reservoir and some large hirundine counts of 250+ Sand Martin there and 100+ House Martin near Chipping Norton. Eight more Black Tern passed through Farmoor on the morning of 13th.

Wader migration remained steady though largely unremarkable through the rest of the month, but return passage is when Tundra-bred juveniles display subtleties of plumage not seen in adult birds, and they often allow a close approach. Two Sanderling that stayed at Farmoor from 14 to 17th were a case in point. 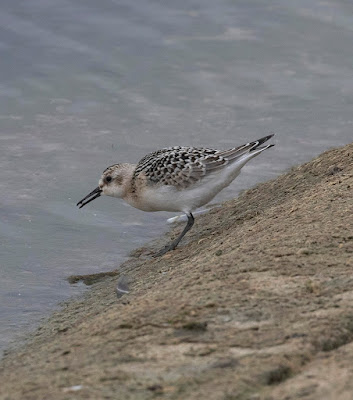 In the absence of as accessible notables our birds of the month were possibly the juvenile Kingfishers that drew a stream of admirers from far and wide to the Shrike Meadow hide at Farmoor. Business was said to be less brisk through August at paying hides around southern England as occasionally two though most often one bird rewarded patient photographers who sometimes made long sojourns here to get their shots. 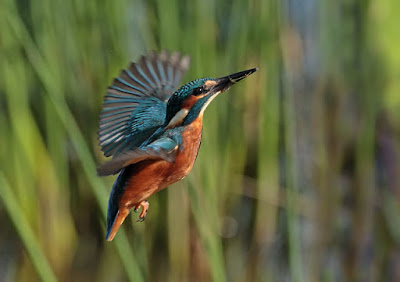 Farmoor watchers, with tongue firmly in cheek are now tasked with sprucing up the perch a bit as other sites look to re-vamp their own Kingfisher props to win back the punters. Here's hoping the young birds involved successfully over-winter to breed beside the Thames at Farmoor again in the future.

Returning to pure birding matters, the first juvenile Caspian Gulls of the new season were searched out by an authorised observer at the private site of Didcot landfill from 20th. A juvenile Little Tern was watched and filmed on the evening of 22nd at Farmoor Reservoir, where a juvenile Mediterranean Gull also continued to put in appearances during this review period.

Tern migration progressed as more than 90 Black Tern made for spectacular viewing at Farmoor on 24th, the second highest number anywhere on a day when a major national movement occurred. If the Kingfishers edged it as birds of the month, this remarkable Tern-fest was probably our county birding event for August. Sightings of more usual numbers continued to month's end.

Passerine passage clicked into gear from mid-month onward, with already plentiful Redstart records across the county being boosted by sightings of Northern Wheatear and Whinchat. A best count of 13 Wheatear was logged at Otmoor on 19th, then six of the latter a day later on a site nearby. 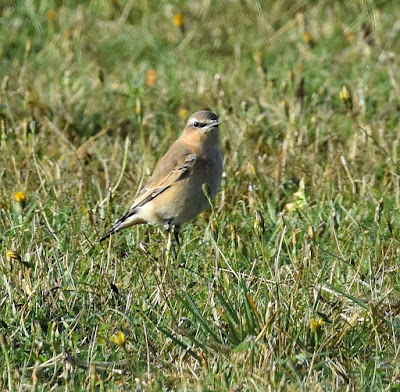 Other Whinchat records from this time came from Benson (18th), Wantage (23rd), Cholsey (24th), Farmoor (26th), Otmoor on a number of dates with seven there on 31st; plus further sightings to month's end, all amounting to a solid local passage of this attractive upland species. 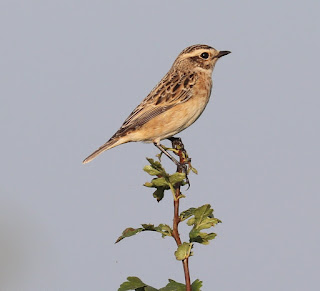 The scarcer breeding passerine Spotted Flycatcher, often in family parties, was a recurring feature this month being reported from no less than 16 different Oxon locations. That suggests they have had an especially good year in our stewardship. The sightings included an impressive 15 in three groups at Lollingdon Hill on 21st. Some of these many records may of course have been migrants.

Our dedicated patch watchers searched out further birds of note over the bank holiday weekend and beyond. Pied Flycatcher were noted fleetingly in four separate places as light easterly winds brought a major fall to more than 180 recorded British sites. Three Tree Pipit were located briefly at Gramps Hill on the Downs on 24 & 25th, a scarce summer visitor more often cited in the county as a fly-over. And good sized parties of Yellow Wagtail were logged at Farmoor, Cuddesdon, Port Meadow and Otmoor as the month drew to its close.

Also at Otmoor, 17 Greenshank on 25th were one of August's stand-out passage wader records. The visiting pair of Common Crane showed occasionally throughout. And a novelty item there this month was a pair of escaped Hawaiian Geese or "Ne Ne", an appealing addition to the selection of exotic or hybrid wildfowl within the RSPB reserve's feral flocks.


Most of this pretty much reflected the wider national picture across inland southern counties during August, with little of "mega quality" being recorded. But as southbound migration reaches it's peak in September, maybe we can look forward to an addition or two to 2019's so far meagre tally of true Oxfordshire rarities.

If anyone has any unwanted birdwatching magazines or publications they would be gratefully received by David ccfhbeagle@gmail.com
Posted by Peter Law at 07:00