September in Oxfordshire stayed on the quiet side for much of the time, but in amongst all the expected sightings for the time of year a number of notable and good county records stood out. Highlights included Manx Shearwater, two separate Wryneck, White-tailed Eagle, Knot at two sites and Little Stint; while passerine movement continued to keep our assorted patch watchers on their toes.

The month opened with an outstanding item when a Manx Shearwater visited Farmoor Reservoir on the afternoon and evening of 3rd. Our bird of the month was the first active and observable one of it's kind in Oxon for 10 years, the previous two occurring in the respective Septembers of 2009 and 2004. 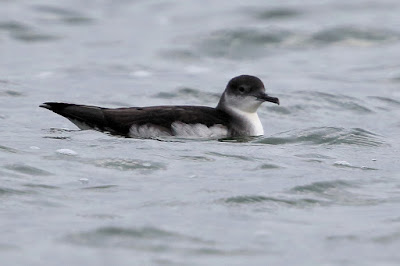 A mystery then developed through the review period when a Manx was reported to have been taken into care near Oxford, then a dead one was found at Blenheim (first site record) towards month's end. It seems unlikely that three individuals should occur locally in such quick succession but whether these were one and the same bird is unclear. An exhausted juvenile Gannet was also rescued in Wantage on 27th.

September is when southbound Wryneck make their skulking and cryptic way through Great Britain and are a favoured patch target everywhere. There were two Oxon records this month, the earlier of which was in the first week from a private garden in Wroxton near the border with Northants.

On 19th news of an unknown Otmoor notable leaked out via Facebook and this was in fact a second Wryneck. Found near the RSPB reserve's first viewing screen by a visitor in the early afternoon, the bird was sighted briefly by just two diligent observers twice more before dusk. But otherwise it remained elusive and was not seen again after that date.

An inevitable outcome of August's re-introduction of six juvenile White-tailed Eagle to the Isle of Wight will be many more "non-countable" records as the satellite tracked raptors range further afield. One of these adventured as far as Essex via central London soon after their release, and the first of the group to be noted in Oxon airspace was seen over Cholsey on 15th. More sightings will clearly be something to look out for in the months ahead.

15 White Stork, thought to originate from another release scheme in the Surrey / Sussex area, also flew over Cholsey at dusk on 18th. So that location may possibly have mystic powers of attraction, though rather more likely some very observant local birders. A Great White Egret was seen in Blenheim Park on 29th. Another long-legged item, our annual visiting pair of Common Crane, departed Otmoor on 6th for their wintering ground the Somerset Levels.

The Best of the Rest


Passage waders continued to trickle through the county at Farmoor Reservoir and other sites, but with no real headliners amongst their ranks. The highlight came towards the end of the third week when juvenile Ruff, Knot and Little Stint - each good county records - could all be encountered closely along the causeway. The reservoir margins are badly affected by blue green algae again this autumn as the pictures show. Two Knot also stopped off briefly at the Appleford pits. 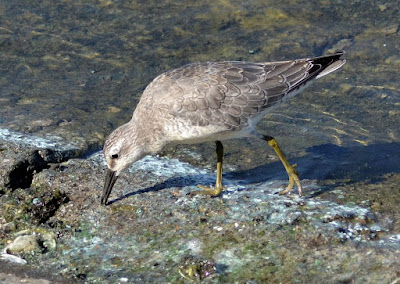 Continued Tern passage was very light indeed with just two Black Tern and an Arctic Tern recorded this month at Farmoor on 12th, then an Arctic again on 29th with another at Pit 60. And there were no sightings of the annual early autumn staple, Little Gull at all.

The prime wildfowl performer in September was a Garganey at Pit 60 for much of the month. Farmoor hosted a Common Scoter on 12th and three Shelduck on 19th, while Mandarin continued to be viewed at Sonning Eye and Henley Road GPs in south-east Oxon. The category C Barnacle Geese that often frequent the Thames Valley west of Oxford became an attractive feature of the feral flocks at Farmoor through this month.

Migrant passerines maintained a strong presence as in August. Prominent amongst these were Northern Wheatear, with records from 14 locations including best counts of 13 at Lark Hill, Wantage (11 & 13th) and eight at Sarsgrove near Chipping Norton (5th).

Common Redstart were logged at eight locations, while Whinchat continued to be noted in various places including five at Lark Hill on 13th and seven in the Otmoor basin on 22nd. Numbers of resident Stonechat appeared to build ahead of winter, with sightings coming from nine separate sites county-wide, peaking at month's end when 14 birds were counted at Otmoor on 30th. The last named included only the second site record for Stonesfield Common on 15th 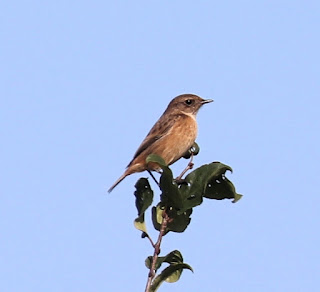 Amongst pre-departure parties of Yellow Wagtail, an individual of the continental Blue-headed Wagtail taxa was frequenting Port Meadow in amongst the cattle there. Patch workers also noted a significant autumn influx of Meadow Pipit, with counts of up to 100 at Sarsgrove in the north, 60 at Lark Hill in the south (21st) and 60 in Port Meadow (30th). And as in August Spotted Flycatcher continued to be recorded in above average numbers at multiple sites. 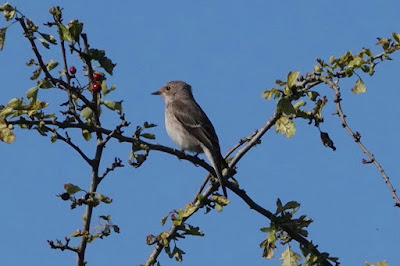 This review's novelty item is Farmoor's leucistic Coot that has become a fixture there in recent months. And finally, following their breeding success in central Oxford this year, five Ring-necked Parakeet observed in flight over Banbury on 19th suggested those colourful characters' further colonisation of our county.


So now just one autumn passage month remains and as the evenings draw in the upcoming few weeks are sometimes described as the best time of year for truly remarkable sightings, though possibly not as far inland as Oxfordshire. But with a Black-winged Stilt present in neighbouring Berkshire for much of this review period, and a Long-billed Dowitcher in Gloucestershire in the final week, we can but hope for something a little out of the ordinary in October.