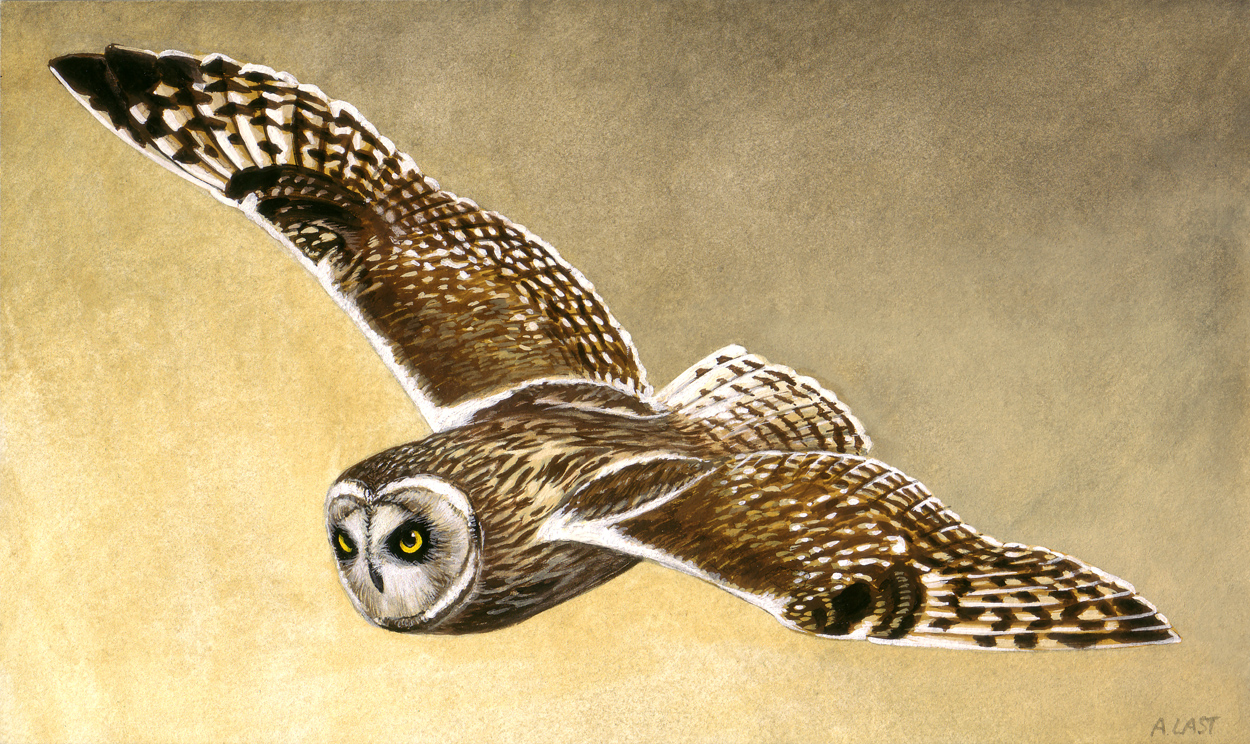 A Grey Plover was found on Otmoor on the 2nd with further unseasonal waders including a Greenshank at Balscote Quarry (also on the 2nd) and the discovery of at least 12 Sanderling at Otmoor on the 8th which set the regular patch listers scrabbling for their wellies. Ruff numbers on the moor were estimated at up to an impressive 50 birds mid month, with a supporting cast of 5 Black-tailed Godwits on the 16th and Golden Plover numbers exceeding 5000 birds on the RSPB reserve. A WeBs (Wetland Bird Survey) count mid month estimated up to 17,000 birds as being present. 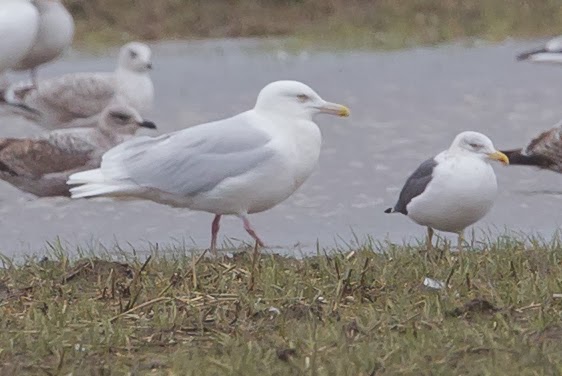 
A second winter Iceland Gull at Appleford on the 3rd was accompanied by a second Iceland (a dark juvenile) and if this wasn't enough excitement for a soggy Oxon field in February... a stunning adult Glaucous Gull was also seen, although sadly it proved to be a one day bird. Another Glauc at Appleford mid month (this time an immature bird) was also sadly destined to be one day wonder . 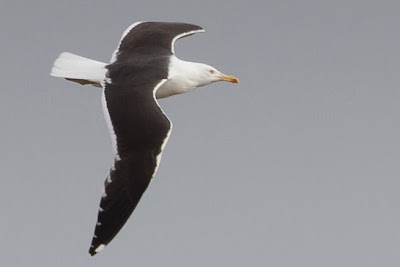 Photo courtesey of The Gun-slinger.

A Baltic Gull was briefly at Appleford on the 5th. Although not a full species this gull remains high on many larid lovers wish lists. A third winter Caspian Gull was on Port Meadow on the 28th. Two adult Kittiwakes were discovered in the roost at Farmoor on the 12th amongst what has apparently been low numbers of gulls taking advantage of the reservoir for roosting, perhaps in part to the abundance of flood water to choose from. A Kittiwake was seen briefly on Port Meadow on the 19th and what was probably the same individual roosted that evening at nearby Farmoor. Unfortunately an adult Kittiwake was found dead near Crowmarsh Gifford on the 24th. A couple of enigmatic Little Gulls (an adult and a first winter) were at the res on the 17th with an adult at Port Meadow on the 28th. 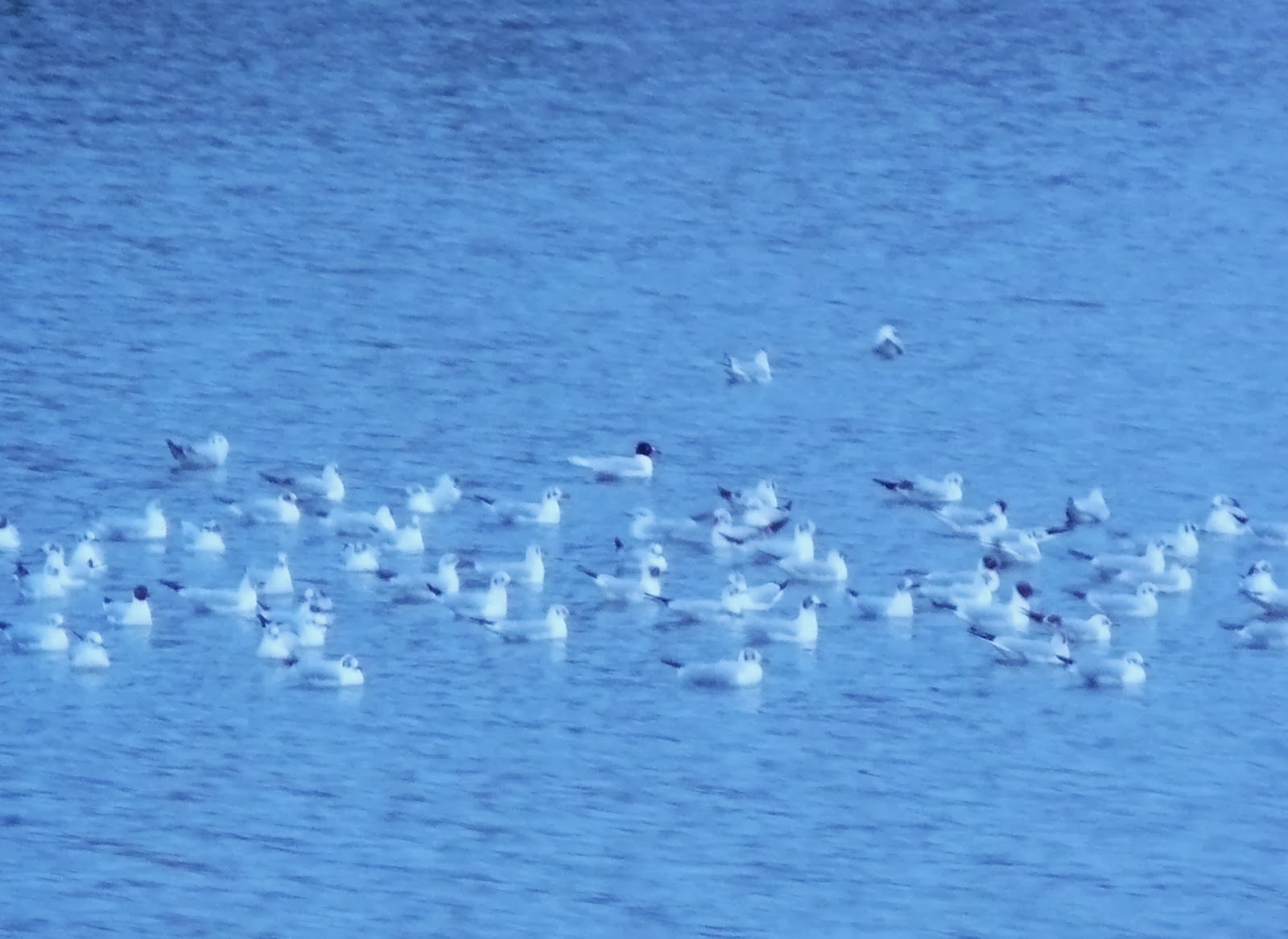 
Mediterranean Gulls were seen at Grimsbury Reservoir near Banbury on the 22nd and at Farmoor on the 23rd and the 28th.


A single Shelduck was on Otmoor on the 17th with this number rising to three on the 24th with a pair briefly on floods near Cholsey on the 10th; another pair were at Port Meadow on and off over the month.


Two Short-eared Owls were frequenting Moorleys (car park field) for most of the month although, somewhat frustratingly for the county photographers, arriving only after dusk. The pair of resident Barn Owls on Otmoor were far more obliging.


The now-resident Bearded Tits were once again being seen sporadically throughout February. Will these popular 'pingers' breed again this year at Otmoor?

At least one of last month's two Siberian Chiffchaff remained loyal to Abingdon Sewage Works until the 2nd amongst double figures of their more common counterparts.


There were a handful of Brambling records from around the county but alas no big numbers. Six Hawfinch were seen within Blenheim park on the 23rd and constituted the only record this winter of what has to be an overlooked species in the county. A Willow Tit was seen at Horley Nature Reserve on the 1st.


The first Curlews have returned to several sites in Oxfordshire to set up territories as have Oystercatchers and Redshank, these harbingers of spring will soon be joined by the diminutive Little-ringed Plover whose arrival, always looks so alien in our now familiar winter landscapes. March will also see the welcome return of some of our other summer residents, with Sand Martins already arriving on the south coast...

Not everyone likes or appreciates twitching or indeed twitchers, but all birders appreciate the ability or stupidity of birds from other continents to turn up in Britain. It seems churlish not to go and take a look at something that’s risked life and wing to settle in an English suburban garden or a beautiful offshore island. It takes some effort, maybe some teamwork and yes, some expense, to see rare birds but most of all you need the gods on your side.

For me 2013 was awful. A combination of bad luck, ill health, work and birds that didn’t stick, meant a miserly 2 new birds seen last year. But, 2005- now that was a year. Collared Pratincole, White-rumped Sandpiper, Pine Bunting, Paddyfield and Radde’s Warbler were just some of the fantastic waifs and strays the gods sent me that year.


In mid November 2005, came news of a Green Heron on Anglesey, a place already in my good books for the mega rare Sooty Tern that initially took a boat trip for us to see. So, on the evening of the 11th of November our three man team of Jon Prowse, Andy Shirley and myself headed back to that stunning corner of Wales, ever hopeful. We arrived late at night, found exactly where Red Wharf Bay was and then a quiet layby for some sleep. At dawn we returned to the bay where a dozen or more cars had hauled in and more on their way. The hushed talk and muted, early morning coughs announced that here were birders who meant business. Speaking briefly to Roy and some of the Plymouth lads we knew, all of us headed out to find the required derelict boat that was the spot favoured by the bird. Strung out either side of the boat for a 100 metres or so, it wasn’t long before someone spotted a wader out in the marshy tideline that appeared to be po-going it’s way towards us. Up and down the humps and gullies of the weedy shore, it came until the magnificent green, brown, purple and creams of this American vagrant heron were in full view of the assembled birders and the appreciation of this bird was audible along the line. We watched it for some time, as it deserved, before the general opinion was to head to Llanfairfechan, across the Menai Straits to find it’s  American cousin, a returning Black Scoter. In convoy, half a dozen cars set off for the area it frequented and, amazingly, we were all very soon looking at a jet black Scoter that looked to have half a peach stuck to it’s forehead, no question of misidentification possible there. Never coming in too close, nonetheless we all got superb views of this distant relative of our own three Scoters.

At this point my pager announced that there was an Upland Sandpiper near Weston Super Mare, yet another American rarity. The Plymouth boys immediately said ‘it’s on our way home’. We said the same with not quite the same element of truth, but hey, it was only a detour. We were now on a roll and some hours later, as we left this enigmatic little wader to its earthworms and headed truly home, the pager went off again. ‘There’s a Little Swift at Sheringham’ was met with a short silence before Jon said ‘anyone fancy another night in the car?'. Feeling that I’d stretched my wife’s goodwill as far as I could, I backed out (she later said I was silly and should have gone, she really is one in a million). After a shower and some food, Jon and Andy headed up to Norfolk for another uncomfortable nights sleep. Still the gods smiled, that morning they saw the Little Swift as it came off the roost and flew off (I still haven’t seen one!) and then later jammed into yet another transatlantic traveller in the shape of a Grey Cheeked Thrush in Potters Bar before heading finally back to Oxfordshire. This one Shirley and I got back on the Wednesday.

A magical weekend, great company, tales to tell, meeting of friends from other parts of the country and, above all fantastic birds who I’m sure, if they had known, would have appreciated the effort we put in to see them. It was truly a very good day- or two.
Posted by Badger at 21:22