So that was October, traditionally the highlight of the birding calendar in terms of rarities. Whilst God's Own County did not really participate in what's been a quite extraordinary month for birding nationally it's had a smattering of good birds to keep us occupied between the mad dashes to the north east coast for yet another First for Britain!


The star bird of the month was a very approachable first winter Grey Phalarope that graced Farmoor's concrete shores from the 21st to the 26th. We have been doing quite well for this species in the county over the last few years with Farmoor getting almost all of the records. This bird proved to be very a popular one with photographers coming from far and wide to see it.


In what has been a record-breaking autumn for Yellow-browed Warblers nationally we managed to get a further two records. There was a belated report from an out-of-county birder of one in a car park in the centre of Witney at the start of the month and a second bird was seen at Bloxham.


Our long staying Purple Heron finally said adios by the 2nd and headed off for warmer climes after an incredible seven weeks at the Otmoor RSPB reserve. This is still a real mega within the county so it was wonderful to have such a prolonged stay from what is a surprisingly difficult bird to catch up with nationally.


The transition of Great White Egret from a mega rarity to something that now gets several records a year has been quite a phenomenon that has really happened comparatively recently. The first records for the county in a long time happened about ten or so years ago with one at Otmoor in '07 and then one at Farmoor in '08. Fast forward to this month when for the first time in the county we had our first record of two of them together at the same time at Dix Pit at Stanton Harcourt on the 29th. As if to emphasise this change of status a single bird was also reported at Otmoor on the 2nd.


On to good county birds now and a Black Redstart was in Oxford on Cornwallis Road in Iffley on the 24th. The first Waxwing of what looks like being a very good Waxwing year was reported at the Aston Rowant nature reserve on the 24th. Already large numbers of this very charismatic bird are hitting the east coast of the country so with any lucky they'll eventually filter down to us. Finally a Snow Bunting was found along the causeway at Farmoor on the morning of the 29th. This is the traditional spot in the county for this lovely Bunting though sadly this particular one proved to be rather mobile and elusive.


The first of three ringtail Hen Harriers in Oxfordshire this month was seen at Lollingdon Hill on the 14th. The second sighting was a bird which arrived on Otmoor on the 23rd and was then joined by another bird a few days later on the 25th.


The Marsh Harrier family remained throughout the month. Merlin started to become more evident in the county at several of the traditional winter sites including Letcombe Bassett on the 1st and Lark Hill on the 4th with an individual harassing the pre-roost of Starlings at Otmoor from the 23rd onwards. Those other harbingers of winter birding, namely the Short-eared Owl, also started to appear in the county this month with birds returning to the RSPB reserve on Otmoor from the 6th whilst individuals were also seen at Cholsey Hill on the 14th and near Eynsham on the 30th.


An adult Whooper Swan was found on the enclosed lagoon at the Ardley Energy Recovery Facility     on the 22nd and remained in to November.


An immature male Scaup was a great find at Stanton Harcourts Dix Pit on the 16th and constitutes the first record in the county for some time.


The Scaup courtesy of Badger


A family group of two adults and two juvenile White-fronted Geese arrived on Otmoor on the 9th as part of a notable movement in to Britain and remained throughout the rest of the month.

Possibly the biggest surprise this month (at least wader-wise) was the discovery of a very late Wood Sandpiper at Chinnor on the 31st.

A Little Stint arrived along the causeway at Farmoor reservoir on the 5th keeping company with a fine looking Knot. The Stint was then joined by a second juvenile on the 12th.


Jack Snipe records included: two birds along the southern shore of Standlake Commons Pit 60 reserve on the 8th; another pair reported at Otmoor on the 9th; an uncharacteristically showy bird in front of the first screen at the reserve on the 29th and an unusual record within an orchard near Cholsey on the 11th. A Grey Plover flew over Farmoor on the 29th.


Sadly it's been a very quiet month on the Gull front with the highlight being an adult Caspian Gull that was discovered within the Didcot landfill site on the 29th before flying towards Radley.


Away from their Henley/Sonning stronghold, a Ring-necked Parakeet was a superb sighting at Yarnton on the 29th. Redstarts were still being recorded last month with individuals seen at Cholsey on the 7th. Whinchat were still at Otmoor in October with a bird still present on the 24th. Whinchat were also seen at Chipping Norton on the 4th, Sparsholt Firs on the 6th, with another late bird near Garsington on the 17th. As Whinchat numbers started to dwindle, Stonechats continued to arrive and were well represented throughout much the county this month.


Numbers of Rock Pipits fluctuated at Farmoor reservoir within the first half of October with counts peaking at six birds on the 6th. Singles were also encountered at Grimsbury reservoir on the 5th and at Kingston Bagpuize on the 26th.


Brambling were seen briefly on Otmoor on the 5th with at least two birds at Woolston Down on the 15th while eight flew south over Kingston Bagpuize on the 20th. A fly-over Woodlark at Lollingdon Hill near Cholsey on the 7th was a fantastic record for the county and one must speculate on the possibility of over-wintering birds within the county particularly on the Downs.

The Art of Birds

This month artist in residence Paul Tomlinson has sketched an encounter with one of the  two juvenile Little Stints that spent some time along the causeway at Farmoor. These tiny waders breed upon the tundra and are a scarce but annual passage migrant through Oxfordshire with more records occurring in the autumn than the spring. 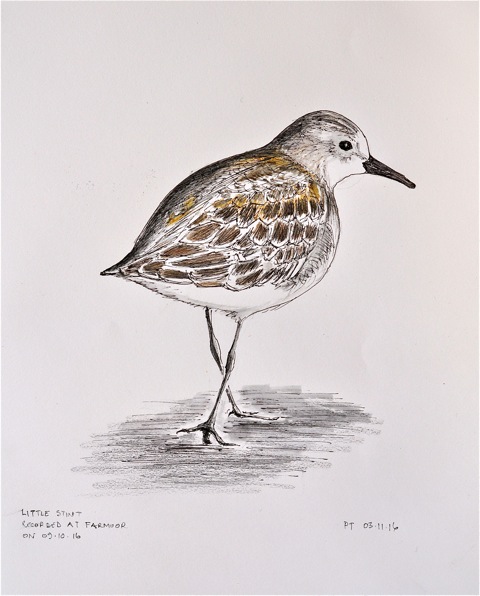 How to Blog via E-mail
by Gnome

Those readers who either have blogs of their own or who are authorised bloggers here on the Oxon Birding Blog, may not be aware that it is possible to set things up so that you can posts things on your blog via e-mail. It's particularly handy when out in the field and you want to put some news out on the Oxon Birding Blog and you don't want to have to fiddle around with the intricacies of the Blogger interface on the tiny screen on your smart phone. Here's how to set it up:


1. You have to be signed into your Google account first. You'll know that you are because when you go to your blog you'll see the "New Post  | Sign Out" options in the top right-hand corner of your blog.You should also see the orange Blogger B in the top left-hand corner, looking something like this: 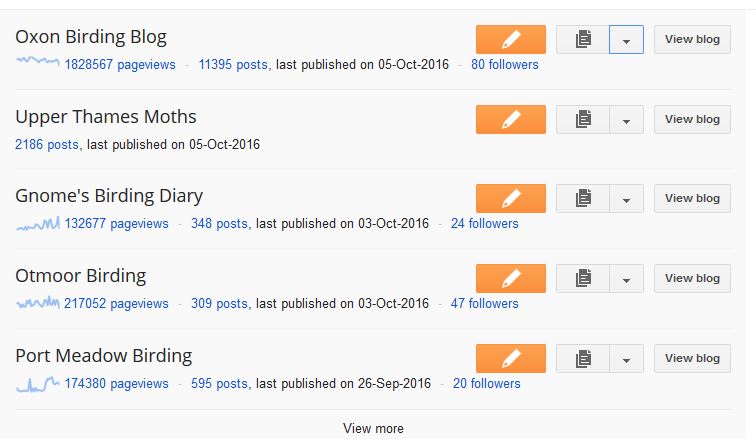 3. For the blog you want to set up e-mail posting for, you need to click on the drop-down arrow on the right-hand side and select "Settings". If you own the blog you will get a lot more options than the two I'm showing here but Settings will always be the last option.

5. Once you've clicked on "Settings" what happens next depends on whether you own the blog or are just a contributor. If you own the blog then you will see the follow list down the left-hand side of the page. You want to select the "Email" option here 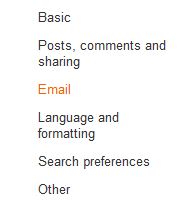 If you are just a contributor then you will immediately be taken to the "Author options" page anyway and can miss out this step.

6. This brings up a page with options about using e-mail. Quite what the page is called depends on whether you own the blog or not but the substance will be the same.

What you need to do is to fill in the "secretWords" bit with some words that no one is likely to guess. Say for example I choose "mysecretblog" as my secret words. I then click on the "Publish email immediately" option instead of the "Disabled" one.


Make sure that you remember to click on the "Save Settings" button after you've done all this otherwise you'll have wasted your time.

How to Use it

It's very straight-forward once you've set it all up. Simply send an e-mail to your special address, which in my example would be adamchartley.mysecretblog@blogger.com. The subject of the e-mail becomes the post title, the e-mail content becomes the main body of the post and any attachments are assumed to be photos which are displayed at the end of the post.


The only thing that you need to be aware of is that if someone else gets hold of your secret words then they can post on the blog in your name simply by sending an e-mail out to the appropriate address so it's best to keep the details secure.